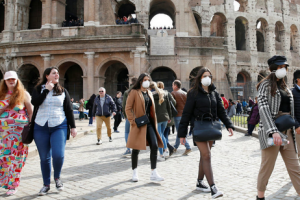 CNA—Several Catholic dioceses in northern Italy have suspended Mass and other activities this week to help contain the spread of COVID-19, the respiratory disease caused by coronavirus.

The northern regions of Italy saw a dramatic uptick in coronavirus cases, prompting some regions to suspend all events or gatherings in public or private.

In response to the outbreak, dioceses in the area have taken various measures, including cancelling Masses and asking Catholics to receive the Eucharist only in the hand.

Italian officials have also imposed quarantine restrictions on several towns in the Lombardy and Veneto regions, where most of the infections have occurred.

The number of coronavirus infections in Italy has reached 219 as of Monday. Six people have died from the virus in the country, which has the highest number of cases in Europe.

The Archdiocese of Milan suspended Masses beginning in the evening Feb. 23 until further notice. The Milan Cathedral has also been closed to tourists Feb. 24 and 25.

In Venice, Patriarch of Venice Archbishop Francesco Moraglia suspended Masses and other liturgical celebrations including baptisms and Stations of the Cross, until Sunday March 1.

Moraglia invited the faithful to “dedicate a convenient time to prayer and meditation” in place of Mass on Ash Wednesday.

The Italian bishops’ conference released a statement Feb. 24 in which they said they renew Pope Francis’ prayer of closeness to those affected by the virus and their families; prayer for doctors and nurses from healthcare facilities, called to face this emergency at the frontier; prayer for those responsible for taking precautionary and restrictive measures.”

The bishops also said they are committed to doing their part “to reduce bewilderment and fears.”

“This is the time to find reasons for pragmatism, trust, and hope, which allow us to face this difficult situation together,” they said.

Other responses include the Diocese of Turin, where the archbishop cancelled all parish events and meetings for the week of Feb. 24 to March 1 with the exception of Mass, asking that all Catholics receive the Eucharist in the hand and abstain from exchanging the sign of peace.

Bishops in the regions of Emilia-Romagna and Liguria also called for the cancellation of Masses and other parish activities this week in cooperation with civil ordinances against public gatherings.

In Padua, the Pontifical Basilica of St. Anthony will remain open for prayer, but Masses and other religious functions are suspended. The basilica’s museum will be closed until March 1.

In an announcement, the Franciscan friars who operate the shrine said they “entrust to the intercession of St. Anthony all the people who are suffering from this epidemic, those who have lost loved ones and those who are doing their utmost to assist the sick and to adequately face this health emergency.””

COVID-19, is a respiratory disease caused by coronavirus which originated in Hubei province (which borders Henan) in China.

The new strain of coronavirus can cause fever, cough, and difficulty breathing. In some cases, it can lead to pneumonia, kidney failure, and severe acute respiratory syndrome.

In mainland China, the death toll of the coronavirus has reached 2,442, and more than 76,000 have been infected.

The virus has spread to 28 countries, with about 1,769 confirmed cases outside mainland China and 17 deaths.

According to the Chinese health authority last week, 80.9% of coronavirus infections are mild, 13.8% are severe, and 4.7% are critical.