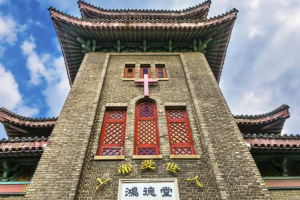 Beijing, China, Sep 23, 2019—(CNA)—Christian churches in China have been ordered to take down displays of the Ten Commandments and replace them with quotes from Chinese President Xi Jinping, according to reports.

According to Bitter Winter, a magazine covering religious liberty and human rights in China,  churches belonging to the country’s state-run “Three-Self Patriotic Movement” Protestant denomination have been ordered to replace displays of the decalogue with sayings of the Chinese president.

The new directive reportedly comes after Three-Self churches were initially told to remove the First Commandment, “You shall have no gods before me,” as Jinping disagreed with it.

Reports indicate that those who have refused to remove any or all of the Ten Commandments have been imprisoned, with leaders and worshippers harassed even in churches that complied with the instruction.

The Communist Party must be obeyed

United Front Work Department officials told the congregation at a Three-Self church in the city of Luoyang in late June that “The Party must be obeyed in every respect. You have to do whatever the Party tells you to do. If you contradict, your church will be shut down immediately.”

The church had removed the Ten Commandments after repeated instructions from the government.

Three-Self churches that have not removed the displays have been shut down, along with a number of unapproved “home churches.” Worshippers at noncompliant churches have reportedly been threatened with governmental blacklisting, leading to restrictions on travel, and the children of believers being barred from some schools or jobs.

Instead of the Ten Commandments, Three-Self churches now display quotes that promote socialism and warn against the influence of the West on China.

“The core socialist values and Chinese culture will help to immerse various religions of China. Support religious community [by] interpreting religious thought, doctrines, and teachings in a way that conforms with the needs of the progress of the times. Resolutely guard against the infiltration of Western ideology, and consciously resist the influence of extremist thought,” reads one of the new “commandments.”

The quote is taken from a speech by Jinping given at a Central United Front Work Department meeting in May 2015.

A pastor in the Three-Self church told  Bitter Winter that he feared the Chinese government is slowly attempting to become a god-figure.

Mainland China’s strategic plan to destroy any religion but communism

“The government’s first step is to prohibit religious couplets,” said the anonymous preacher. “Then it dismantles crosses and starts to implement the ‘four requirements’ by ordering the national flag and ‘core socialist values’ to be placed in churches. Surveillance cameras to monitor believers and religious activities are then installed. The last step is to replace the Ten Commandments with Xi Jinping’s speeches,” he said.

Since coming to power in 2013, Chinese President Xi Jinping has mandated the “sinicization” of all religions in China, a move which the U.S. Commission on International Religious Freedom called  “a far-reaching strategy to control, govern, and manipulate all aspects of faith into a socialist mold infused with ‘Chinese characteristics.’’

The Chinese government is in the midst of implementing a five-year “sinicization plan” for Islam, a religion that has faced increased persecution in the country with at least 800,000 Uyghur Muslims held in internment camps.

Vatican accommodation of the “sinicization” program was a much discussed topic during the formalization of last year’s agreement between the Vatican and China that regularized the country’s government-appointed bishops with the Holy See.

Previously, bishops affiliated with the “Chinese Catholic Patriotic Association” were consecrated illicitly and previously held to be out of communion with Rome.

The full terms of the Vatican-China agreement still have not been released.