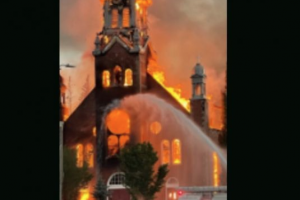 CNA—The Royal Canadian Mounted Police (RCMP) are investigating two more fires at Catholic churches in Canada as “suspicious,” after four churches on tribal lands burned down within one week.

At 3 a.m. on Wednesday, June 30, firefighters responded to a fire at St. Jean Baptiste Parish in the town of Morinville, Alberta.

The church was over 100 years old and was destroyed by the fire.

According to Iaian Bushell, the general manager of infrastructure and community services for the town of Morinville, “the fire was fully involved from the basement when the first fire crews got there,” and that the building had already begun to collapse when firefighters arrived.

“It’s one of the largest buildings. It’s very old construction so, an awful lot of wood, so it went very quickly and it was a very difficult fire to fight,” he said to CTV News Edmonton. According to Bushell, firefighters from five different areas came to assist with extinguishing the flames.

Bushell said that “the timing is unfortunate,” but he stopped short at calling the fire deliberately set.

“I’ll let the fire investigator get into that properly,” he said to CTV.

Also on Wednesday, a fire was reported and extinguished before it caused damage to St. Kateri Tekakwitha church on Sipekne’katik First Nation land in Nova Scotia. Unlike other recent fires, which occurred in the western provinces of British Columbia and Alberta, the fire occurred in the maritime province on Canada’s east coast.

At 4:20 a.m., firefighters and the Indian Brook Royal Canadian Mounted Police responded to reports of the fire at St. Kateri Tekakwitha parish. The church is located about 40 miles northeast of Halifax, the capital of Nova Scotia. The fire is being described as “suspicious.”

John Stevens, a spokesman for the Archdiocese of Halifax-Yarmouth, told CNA that “the Katilin Healing and Cultural Centre attached to the church was damaged,” but added, “[f]ortunately, no one was harmed.”

“The Volunteer Fire Department was on the scene quickly and we are grateful for their rapid response,” he said, adding that “the RCMP are investigating the matter.”

“Archbishop Dunn visited the site this morning and asks we keep everyone involved in our prayers.”

Cpl. Chris Marshall, a police spokesman, said that he is uncertain what prompted the fire to be deemed “suspicious,” but added that surveillance footage of the incident will be examined.

Fires have occured at several other churches in Canada in recent weeks, with four Catholic churches burning to the ground between June 21 and June 26.

In the early morning hours of June 28, a fire was extinguished at the Siksika Nation Catholic Church in Alberta, without significant damage to the church. A preliminary investigation indicated that the fire had been set intentionally.

From June 21 through June 26, four other Catholic churches located on tribal lands in British Columbia burned to the ground.

An Anglican church was also found to be on fire on June 26, but the fire was extinguished and caused only minor damage.

Politicians on the local and national level spoke out against the repeated incidents of fires at churches in Canada.

“It is appalling to see churches in Canada burned and vandalized,” said Erin O’Toole, the leader of the Conservative Party of Canada, in a tweet on Monday.

“We all have work to do on the path to reconciliation, and these acts undermine the important discussions on how we move forward,” he said. “It needs to stop.”

His comments were echoed on Wednesday by Jason Kenney, the premier of Alberta.

“I condemn what appears to be another violent hate crime targeting the Catholic community,” said Kenney.

“The century old église de Saint-Jean-Baptiste was the heart of Morinville, and a key part of the history and spiritual life of Alberta’s francophone community,” he added.