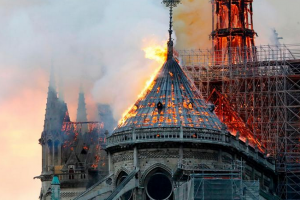 We at Catholic Business Journal are in tears as we post news that the iconic 12th Century Cathedral of Notre-Dame in Paris is now fully engulfed in flames, its spire collapsed and the fire now advanced to the front of the Cathedral. UPDATE: Although the famed Cathedral sustained significant damage, including the collapse of the entire roof and the main spire and substantial damage to the rose windows, it is reported that the stone vault remains largely intact and the interior was described as ‘relatively untouched’.  It is also reported that many artifacts were saved. More details forthcoming, also see curated links below.

Multiple eyewitnesses shared photos and videos of the cathedral throughout the nightmare.

The entire cathedral roof appears to have collapsed, while the fire continues to burn within the main structure.

Initial reports indicated that burning debris from the fire was falling in the immediate vicinity of the cathedral, but local media are now describing the fire as contained with in the cathedral building itself.

No injuries reported at this time

No announcement has yet been made concerning any injuries or fatalities resulting from the fire.

Paris mayor Anne Hidalgo issued a series of brief statements via Twitter saying that emergency responders are fighting to control the flames and appealing to local residents to keep the area clear to assist their efforts.

Officials have not yet determined what caused the fire, which is still burning. Both the fire department and city authorities have confirmed that invesitgations into the origin and cause of the fire will be opened as soon as possible.

Built between the twelfth through fourteenth centuries, the landmark cathedral in the French capital is one of the most recognizable churches in the world, receiving more than 12 million visitors each year.

The cathedral was undergoing some restorative work at the time the fire broke out, though it is unknown if the fire originated in the area of the work.

The fire comes after several weeks of vandalism and arson attacks on church buildings across France.

French President Emmanuel Macron released a statement on Twitter expressing the “emotion” of “the whole nation.”

Macron said his thoughts were with all Catholics and French citizens, saying: “Like all our compatriots, tonight I am sad to see a part of [all of] us burn.”