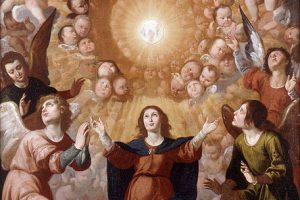 Last Sunday, the priest at a local parish where I attended Mass underscored the “unimaginable power” of Our Lord in the Eucharist and the importance of drawing closer to the Blessed Sacrament by sharing — calmly yet passionately, at the very end of his sermon — that a parish in his homeland had just been burned to the ground … but they found the Holy Eucharist untouched in the tabernacle.

“It was a miracle.” he said, challenging us to imagine what miracles Our Lord could accomplish in our lives and circumstances and in the world if we only would draw closer to Jesus in the Blessed Sacrament.

Here is what happened in his homeland last week:

CNA—In the aftermath of the fire that gutted a church in Cameroon, Bishop Aloysius Fondong of the Diocese of Mamfé entered the ruins to retrieve the Blessed Sacrament and found the sacred Hosts and the ciborium containing them to be intact.

On the night of Sept. 16, armed men set fire to St. Mary’s church in the town of Nchang, located in the Diocese of Mamfé, and kidnapped five priests, a nun, and three lay people.

In a video released Sept. 21 by Aid to the Church in Need (ACN), Fondong is seen entering the burned-out church and making his way through the rubble until he reaches the tabernacle, placed on a wall next to a cross.

After opening the tabernacle, the prelate genuflects and proceeds to remove the ciborium containing the consecrated Hosts from the tabernacle.

“What happened is abominable. They are testing the patience of God,” the bishop said, according to a tweet from ACN.

A Vatican News article said that Radio Evangelium of the Diocese of Mamfé reported that some 60 armed men attacked the Catholic community in Nchang the night of Sept. 16 and kidnapped five priests, a nun, a cook, a catechist, and a 15-year-old girl living with the nuns.

According to the Vatican news agency Fides, the archbishop of Bamenda, Andrew Nkea Fuanya, said that the kidnappers have demanded a ransom. The prelate commented that there are groups that see the Church as an “easy target to make money.”

This story was first published by ACI Prensa, CNA’s Spanish-language news partner. It has been translated and adapted by CNA.