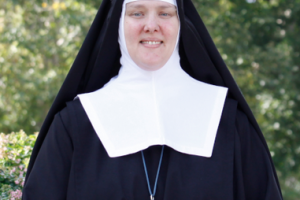 21 years after her graduation from Thomas Aquinas College — and 16 after she left the United States to enter the religious life in Italy — Mother Madeleine Marie of St. Joseph (Mary Kay Ellis ’99) returned to the California campus last week.

As Superior of the Sister Adorers of the Royal Heart of Jesus Christ Sovereign Priest, Mother Madeleine Marie travels the world to oversee the Sisters’ eight houses in five countries. Yet what brought her to California was an invitation to speak at the Ventura / North Los Angeles chapter of Legatus, the international organization of Catholic business executives. Last Thursday she delivered a talk, “The State of the Church in Europe,” to the chapter’s members at St. Jude the Apostle Church in Westlake Village.

After graduating from the College in 1999, Mother Madeleine Marie worked for five years at her family’s business in Green Bay, Wisconsin. Around that time she heard a powerful homily from a visiting priest of the Institute of Christ the King which led her to discern a calling to the religious life. Drawn by their charism of Eucharistic Adoration and prayer for the sanctification of priests, she entered the Sister Adorers in 2005 — despite not knowing any French, the language spoken in all of the order’s convents. Yet she soon learned the language and made final vows in 2009. In 2019 she was named mother superior.

“I have a responsibility for the wellbeing of the community and also the wellbeing of each sister —physical health, psychological health, spiritual health, and all of that,” says Mother Madeleine Marie of her growing order. Of the 57 Sister Adorers, just 25 are professed; there are also 25 novices, 7 postulants, and at least 6 more postulants expected to enter later this year. The sisters hail from 14 countries and 4 continents, and in 2019 Mother Madeleine Marie opened a new house in Wisconsin, so as to accommodate the burgeoning number of vocations in the United States.

“I do my best to dispose things,” she says. “Then God does everything. God does the rest.”

While in California, Mother Madeleine Marie was able to meet up with old friends and classmates at a reception hosted by… read more>>