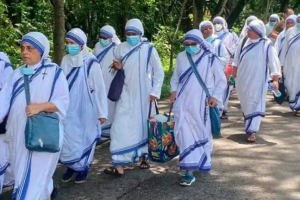 Missionaries of Charity expelled from Nicaragua, along with 100 other NGOs

By CBJ and Walter Sanchez Silva

The Marxist government of Nicaraguan Sandinista National Liberation Front leader Daniel Ortega, which has been in power for 15 years, expelled 18 Missionaries of Charity from the Central American country on July 6, 2022.  But that’s not all…

Ripped away from serving the poorest of the poor

According to the newspaper El Confidencial, the nuns were taken by the General Directorate of Migration and Immigration and the police from the cities of Managua and Granada, where they had been serving the poor, to the border country of Costa Rica.

Of the 18 sisters, there are seven Indians, two Mexicans, two Filipinos, two Guatemalans, two Nicaraguans, one Spaniard, one Ecuadorian and one Vietnamese.

Not alone in being forced to leave Nicaragua

The dissolution of the Missionaries of Charity and another 100 NGOs in Nicaragua was approved June 29 by the National Assembly on an “urgent” basis and without any debate.

The sisters were welcomed to the Diocese of Tilarán-Liberia in neighboring Costa Rica by Bishop Manuel Eugenio Salazar Mora.

“It’s an honor for our Diocese of Tilarán-Liberia that the soles of your feet should tread on these lands,” the prelate wrote about the sisters on Facebook.

“We pray for the Church in Nicaragua, for its bishops, priests, men and women religious. Sisters, welcome to these lands; our diocese has open doors to receive you. Thank you for your example, dedication, and service to the poorest of the poor,” he said.

“May St. Teresa of Calcutta continue to intercede for your intentions. Long live Christ the King!” he concluded.

Attorney Martha Patricia Molina Montenegro, a member of the Pro Transparency and Anticorruption Observatory, told ACI Prensa, CNA’s Spanish-language sister news agency, that “the dictatorship” of Ortega and his wife, Vice President Rosario Murillo, “is characterized by granting citizenship to foreigners accused in their own countries of being criminals and expelling honorable people who are also Nicaraguan nationals.”

The lawyer charged that “the dictatorship has a frontal war against the Catholic Church of Nicaragua and its objective is to completely eliminate all those institutions related to the Church.”

“The expulsion of the Sisters of Charity is one more illegality of this regime that is protected by laws that have been denounced by civil society and citizens as unconstitutional,” she said.

Molina told ACI Prensa that the elderly whom the sisters cared for “have also been expelled from the nursing home” but that the sisters “have made sure that they remain in good hands and not as the dictatorship wanted, which is that they go back to being homeless on the street.”

“Possibly the building where the nursing home was located will be confiscated by the dictatorship, as happened with the buildings of other nonprofit organizations,” she said.

Molina has compiled a report titled “Nicaragua: A Persecuted Church? (2018–2022),” which documents 190 attacks and desecrations perpetrated against the Church in the last four years.

The report shows that the regime of Ortega “initiated an indiscriminate persecution against bishops, priests, seminarians, religious, lay groups, and toward everything that has a direct or indirect relationship with the Catholic Church.”

“The offensive and threatening language of the presidential couple against the Catholic hierarchy became more and more evident and frequent; and the actions of some public institutions against the charitable work of the Church increased,” the report indicates.

Although “we can’t affirm that all the mishaps compiled in this study have been planned and executed by the followers of Ortega-Murillo,” Molina’s investigation says, “neither can one plead not guilty.”

“The truth is that in years before President Ortega assumed power, these frontal attacks against religious institutions were not carried out,” the report says.