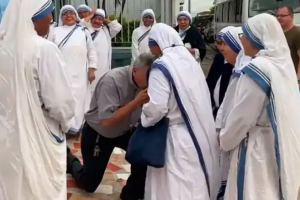 Costa Rican Bishop Eugeniuo Salazar Mora greeted the Missionaries of Charity who had been kicked out of Nicaragua with the most beautiful, inspiring and humble gesture and words, as you’ll see in this recount.

CNA—The bishop of Tilarán-Liberia in Costa Rica, Eugenio Salazar Mora, on July 6 knelt as he greeted the superior of the Missionaries of Charity, who were expelled from Nicaragua by the government of President Daniel Ortega.

The sisters of the order founded by St. Teresa of Calcutta were welcomed to Costa Rica at a parish in the town of Cañas.

A video posted by the bishop on Facebook shows him greeting the nuns one by one, who in turn kiss his episcopal ring. When he came to the superior, Salazar knelt down and it was he who kissed the sister’s hand.

The Diocese of Tilarán-Liberia explained that “the sign of reverence that [the bishop] makes toward the mother provincial is a sign of being at her disposal and of service toward this community.”

“In receiving you we have received Jesus Christ”

In another video, posted July 7, the bishop said he didn’t know the reasons for the expulsion of the nuns, who “remain silent because they are religious, because of their spirituality of not seeking recognition, not getting involved in controversies, and they offer their pain for the Costa Rican people.”

“They have had difficult times, fearful for their personal safety, knowing that they are of several different nationalities and some of them are older. They were very worried until they arrived on Costa Rican territory,” the prelate continued.

“If it had been up to them, they would stay in Nicaragua; they love Nicaragua, the Nicaraguan people, especially those most in need,” the bishop noted.

“I don’t see any fault on their part, they’re just women, spouses of Jesus Christ, consecrated religious, who only aim to serve the poor, to do many things that many others don’t do,” he stressed.

“But, well, that’s the life of the Christian; also the dimension of martyrdom is part of Christian spirituality. The Church of Jesus Christ is the persecuted Church — otherwise it would not belong to Christ,” Salazar said.

Following the example of St. Teresa of Calcutta, “they only seek one privilege: to love and serve the poor, the most needy,” he said.

After requesting prayers for Nicaragua, the prelate stressed that “in receiving you we have received Jesus Christ. You are valiant women, of simplicity. Count on us, we are at your service.”

Ortega’s regime, in power for 15 years, expelled 18 Missionaries of Charity from the Central American country on July 6.

According to the EFE news agency, the dissolution of the Missionaries of Charity and another 100 NGOs in Nicaragua was approved June 29 by the National Assembly on an “urgent” basis and without any debate.

Of the 18 sisters, there are seven Indians, two Mexicans, two Filipinos, two Guatemalans, two Nicaraguans, one Spaniard, one Ecuadorian, and one Vietnamese.

At the end of his message, Salazar said that “love will overcome, love will triumph. God has the last word and not man. Onward Nicaragua, onward Nicaraguan Christians! Long live Christ the King!”