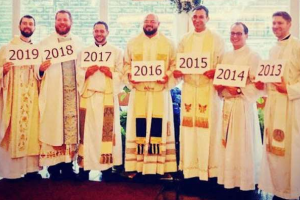 Vocations: 7 priests ordained in 7 years: What’s the ‘secret sauce’ at this Ohio parish?

CNA—Starting in 2013, and every year since for the past seven years, one young man from the parish of St. Mary’s in Hudson, Ohio, has been ordained a priest of Jesus Christ for the Catholic Church.

It’s a rarity in the Catholic Church in the United States to have that many priests coming from one place in such a short time span. The timing of it all was something that could have only been orchestrated by God, said Fr. Ryan Mann, one of the “seven in seven” priests, who was ordained in 2014.

Between staggered entrances to seminary after high school, college, or the start of a career, and some of the men dropping out of seminary for a year or two only to come back, “the seven in seven could not have been orchestrated ahead of time,” Mann told CNA.

CNA spoke with three of the “seven in seven” priests to find out what it is about St. Mary’s parish that is fostering so many vocations.

‘The first fool’ – Seminarians and priests as role models

Before the seven, there was Fr. Stephen Flynn, a priest from St. Mary’s who was ordained in 2008.

He “got the ball rolling” among the young men at St. Mary’s, Mann said.

“Once the ball got rolling, it was easier to call this guy and say, ‘Hey what’s it like?’ or if he was home in the summertime you can see – ‘Is he weird? Oh he’s normal, oh good, I can be normal and do this,’” he said.

“In many ways he was kind of the first fool who went to seminary” and had the courage to make the leap, added Fr. Patrick Schultz, a priest from St. Mary’s who was ordained in 2016.

Schultz said that, starting with Flynn, the seminarians from St. Mary’s would return to the parish on their breaks from seminary and spend a lot of time with the youth group, which allowed other young men to get to know seminarians on a personal level.

“When you talk about the ‘secret sauce’, I think it’s the fact that…you get one seminarian, and you make him as visible as possible to demystify what being a seminarian is,” he said.

Additionally, he said, the formation that seminarians receive help them not only to become holier, but to become more fully human and more fully alive, which is helpful for others to see who are considering a vocation.

“So you enjoy life, you love movies, you love bonfires, you love chips and salsa, you love watching Nacho Libre – you’re not just this cloistered off, speaking in Latin, far-removed ethereal person,” he said.

Fr. Rich Samide, a priest from St. Mary’s who was ordained in 2018,  told CNA it “helped immensely” in his discernment to know someone who had already gone to seminary.

“Seminary was not some unknown place with unknown men studying for priesthood. I knew that if I went to seminary, I would already know several of the seminarians,” he said.

“They were real to me, and made the idea of going to seminary real. I knew them as men who had normal interests, and diverse personalities. I could see that I could flourish as a seminarian, and as a priest, through their example.”

Each priest that CNA spoke with mentioned the example of happy and holy priests who were already at the parish – in particular, Fr. Damian Ference, who served as parochial vicar at St. Mary’s parish for several years.

He encouraged vocations, he prayed for them and mentioned them in homilies and intentions, and he spent time investing in the young people at the parish, Samide said.

“He mentored so many of us who were considering the option of priesthood or religious life, and, especially for the young men considering the priesthood, he gave a lived example of how priesthood might look for us. I had never really gotten to know a priest personally before him, and that helped so much in my discernment,” Samide said.

Schultz said he knew Ference when he was in high school and Ference was a “freshly ordained” priest, and that his enthusiasm for Christ and for life was attractive.

“This is a dude who had a rock band as a priest at the parish, he knew culture and movies and books, and he lived his vocation with such an intensity and a joy, that it was like well, if that’s priesthood, that’s not that bad!”

The importance of an active youth group

The second thing that each priest highlighted was the importance of the Life Teen program at the parish – a youth group that has engaged 5th graders through high schoolers at the parish for 25 years now.

“I would be remiss…if I did not mention the pivotal role that Life Teen had in my faith formation and in my eventual discernment of a priestly vocation,” Samide said.

“Life Teen provided me with a solid community of disciples that encouraged me to go deeper in my relationship with Jesus Christ, and, quite frankly, catapulted me into discipleship.”

While he had always attended Mass on days when he was obligated to, Samide said Life Teen helped him make his faith his own, and introduced him to friends who encouraged him to seek God.

“From that place of discipleship, I began to discern the priesthood,” he said.

Schultz also pointed to the active Life Teen program as a key to fostering vocations, and encouraged parishes to heavily invest in their young people.

For Mann, Life Teen was not something he became too involved in until was a young adult, and he was asked to help with the program.

But St. Mary’s has always been a place where young people have been welcomed and involved in parish life, he said, which helped foster a culture of vocations.

“We always have young people around, they always felt very welcome and at home here,” he said.

“We had priests hanging out with our youth group during adoration, or teaching them night prayer, or praying a rosary with them, or praying to saints with them, being with them, sharing the spiritual tradition of the Church,” he added.

The power of a personal invitation

Another thing all three priests mentioned to CNA that helped foster their vocation was that someone, at some point, looked each of them in the eye, called them by name, and encouraged them to at least consider discerning the priesthood.

“For almost every guy someone looked us in the eye and said: ‘You should be a priest, I think you’d be really good at it. You should consider it,’” Mann said. It’s biblical, he added, because Jesus called each of his disciples by name.

“I think the average high school guy going to our youth group at some point is seriously asked to consider this. And our parish is very supportive,” Mann noted.

“…members of the parish were not afraid to approach me and other young men and ask us if we had considered the option of priesthood. That boldness was invaluable to me,” he said.

“A young man might be thinking about the possibility of priesthood, but often he is too afraid to articulate it to anyone else. When someone else approaches him and says that he/she sees gifts in him that could make him a good priest, it serves to reassure him that what he is perceiving in his heart is real and merits more discernment,” he added.

The priests also each mentioned specific prayer for vocations as a key aspect of their parish. There were prayers for vocations during the parish’s daily rosaries, during weekly holy hours, at Mass and on other occasions.

Discipleship is the key

But ultimately, Mann said, there’s not necessarily a 5-step program that will ensure the fostering of vocations – it’s about making disciples of Jesus, he said.

“It’s very tempting and alluring to say, ‘Give me the five steps to have vocations at my parish, and you could probably write a book and make a lot of money with that, but it doesn’t work that way,” he said.

“Those steps tend to put everything in our control…like its a vending machine. If I do these 5 things, the output has to be vocations. But really it’s much more biblical, what happened here,” he said.

“When people have a living and active relationship with Jesus Christ, and seek to do his will in their lives, vocations will develop organically,” Samide noted.

“As parish communities seek to grow as disciples, they will encourage younger members to consider ways that they might serve the Lord. Discipleship is the key.”