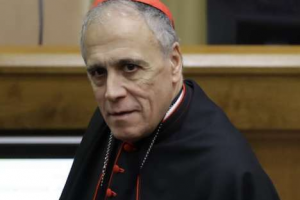 Head of US bishops after Vatican abuse summit: ‘Intensify the Dallas Charter’

CNA—Cardinal Daniel DiNardo, president of the U.S. Conference of Catholic Bishops, has promised “unyielding vigilance” and an intensification of the Dallas Charter following the Vatican summit on the sexual abuse of minors.

“We owe survivors an unyielding vigilance that we may never fail them again,” DiNardo said. “How then to bind the wounds? Intensify the Dallas Charter.”

The cardinal, who heads the Archdiocese of Galveston-Houston, released a statement Feb. 24, at the conclusion of a four-day Vatican summit that brought together heads of bishops’ conferences from countries around the world to discuss sexual abuse and child protection.

The summit discussed responsibility, transparency, and accountability, with video testimonies from sex abuse victims, working group discussions, a penitential liturgy, and a closing Mass with final remarks from Pope Francis.

“These have been challenging, fruitful days,” DiNardo said in his statement. “The witness of survivors revealed for us, again, the deep wound in the Body of Christ. Listening to their testimonies transforms your heart. I saw that in the faces of my brother bishops.”

During the gathering, Pope Francis called for “concrete and effective measures,” and presenters spoke about “a code of conduct for bishops, the need to establish specific protocols for handling accusations against bishops, user-friendly reporting mechanisms, and the essential role transparency must play in the healing process,” DiNardo said.

These efforts include intensifying the 2002 Charter for the Protection of Young People – known as the Dallas Charter – which currently governs how U.S. dioceses are to handle sexual abuse allegations against priests, he said.

“Achieving these goals will require the active involvement and collaboration of the laity,” the cardinal stressed. He highlighted the need for prayer, expertise, and ideas from the laity, and their efforts to ensure that policies are followed and effective.

“All of the models discussed this week rely upon the good help of God’s people,” he said.

DiNardo said that he and the U.S. bishops were affirmed in the ongoing efforts and will prepare proposals for the upcoming U.S. Bishops’ Conference assembly this June.

“There is an urgency in the voice of the survivors to which we must always respond,” he said, adding, “I am also aware that our next steps can be a solid foundation from which to serve also seminarians, religious women, and all those who might live under the threat of sexual abuse or the abuse of power.”

While the “agony of Good Friday” can cause “a sense of isolation and abandonment,” we can trust in God’s promise of healing, encountering the Risen Christ as we bind the wounds that have been caused, the cardinal said.

He thanked those who have prayed for the success of the Vatican summit in recent days and stressed reliance on Christ, saying, “In Him alone is all hope and healing.”