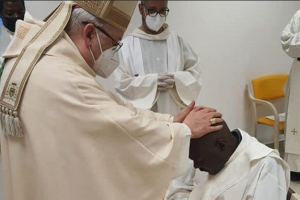 CNA—Fr. Livinius Esomchi Nnamani, who was ordained to the priesthood in his hospital room on Holy Thursday with special permission from Pope Francis, has died of leukemia at the age of 31.

The young priest’s funeral was held in Rome on April 26 (2021) at the parish of San Giovanni Leonardi. He had dedicated the last 23 days of his life to offering Mass from his hospital bed, a priest who knew him recalled.

“His altar was the [hospital] bed, where he was able to unite his sufferings to those of Christ. He lived and renewed his Eucharist in a strong and visible way and this is a great lesson for all priests,” Fr. Davide Carbonaro told Roma Sette, a newspaper of the Diocese of Rome.

“His gift was of a different priesthood, but at the same time, the same as that of every priest. His particular union with the sacrifice of Christ teaches us to celebrate with greater awareness,” he said.

Fr. Livinius had been studying at the Pontifical University of Saint Thomas Aquinas, also known as the Angelicum, as a seminarian from Nigeria for the past two years while receiving medical care in Italy for his cancer.

Then came a rapid, severe decline in health 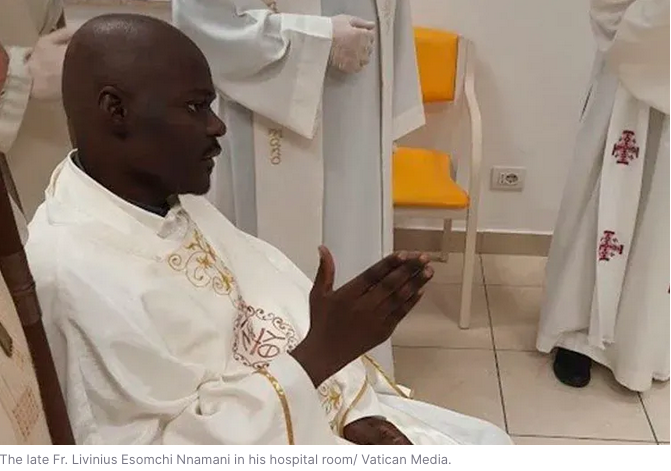 After his condition took a turn for the worse, Fr. Livinius wrote to Pope Francis asking to move forward his ordination date. Fr. Livinius had first entered religious life with the Order of the Mother of God in Nigeria ten years ago and had made his final vows in September.

The pope’s reply came on March 31 that the seminarian could be ordained the following day, Holy Thursday, according to Vatican News.

“As a priest, you will be joined with Jesus to make your body an offering pleasing to God. Our priesthood, indeed, reaches its peak when together with the bread and wine, we know how to offer all of ourselves, the things the Lord has given us, and our very lives,” Bishop Libanori said in his homily.

The new priest began his ministry right away by giving his blessing to doctors and nurses in the hospital. He died on April 23 after praying the Divine Mercy chaplet with his superior, another priest, and a young man discerning his vocation.

Following his funeral, Fr. Livinius’ remains will be transferred to his hometown in Nigeria, where he will be buried. The Angelicum will host a memorial Mass for the young man on May 3.

Fr. Carbonaro, the superior of the community that hosted Fr. Livinius during his time in Rome, reflected on what he had learned from the late priest’s witness.

“I have thought a lot about my priestly life: Livinius may not have had the opportunity that I had to proclaim the Gospel and serve the people of God, but the Lord chose him in this very special priesthood by uniting them with him,” he said.

“It makes me think a lot about praying and giving thanks for the priceless gift we have received out of love and only out of love. I am sure that his offering, combined with that of Christ, will do good to the Church and for the priests called to fall in love with their ministry … We are grateful to Pope Francis for this gift of fatherhood and tenderness.”