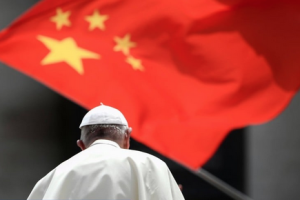 Of Catholics and Chinese Communists: The Vatican renews its bad deal with Beijing that ignores human-rights and religious abuses

WSJ—Even as Xi Jinping was being crowned as China’s unchallenged dictator, the Vatican said Saturday it has renewed its agreement with the Chinese Communist Party. This is the second renewal since the deal was brokered in 2018, though there’s little progress on religious freedom to show for it. Its main contribution has been to mute Vatican criticism of human-rights abuses, from the genocide of the Muslim Uyghurs to the political prosecution of Cardinal Joseph Zen in Hong Kong.

The deal gives Beijing a say in the appointment of Catholic bishops, but it’s telling that its terms are secret. A handful of mostly pro-Beijing bishops have been appointed. But the National Catholic Register reports that 36 of China’s 98 dioceses lack a bishop…. read more