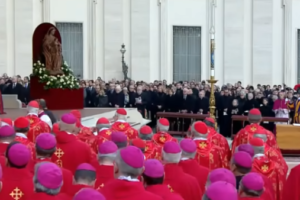 The historical, beautiful Rosary and funeral Mass for Pope emeritus Benedict XVI took place January 5, 2023, but don’t fret if you missed it.  From the Sagrato of Saint Peter’s Basilica, recitation of the Rosary and Solemn Requiem Mass for Pope emeritus Benedict XVI, presided over by Pope Francis, you will find it all here, recorded by the Vatican News.

The funeral Mass was simple and solemn, in accord with Benedict XVI’s wishes. The Sistine Chapel Choir sang the “Salve Regina,” “In Paradisum,” and other hymns. An image of the resurrection of Christ was hung from St. Peter’s Basilica behind the altar.

Royalty, cardinals, patriarchs, government officials, and many Catholic families and religious attended the funeral on a cold and foggy morning at the Vatican. More than 3,700 priests concelebrated the Mass.

The ceremony began with the transport of the pope emeritus’ wooden coffin from the basilica to St. Peter’s Square.

Pope Francis presided over the funeral for his predecessor. In his homily, Francis reflected on Jesus’ final words on the cross: “Father, into your hands I commend my spirit.”

“God’s faithful people, gathered here, now accompany and entrust to him the life of the one who was their pastor,” he continued. 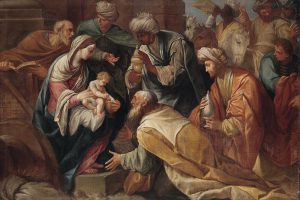