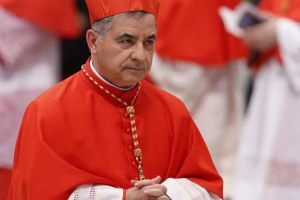 CNS—In a move apparently related to Vatican financial scandals, Pope Francis accepted Cardinal Angelo Becciu’s resignation as prefect of the Congregation for Saints’ Causes and his renunciation of the rights associated with being a cardinal, the Vatican announced late Sept. 24.

The cardinal, 72, told reporters Sept. 25 that Pope Francis told him he was being investigated for embezzling an estimated 100,000 euros ($116,361) of Vatican funds and redirecting them to Spes, a Caritas organization run by his brother, Tonino Becciu, in his home Diocese of Ozieri, Sardinia.

Meeting reporters at a religious institute near the Vatican, Cardinal Becciu denied any wrongdoing.

“I have not made my family rich,” he said.

The cardinal said he met with Pope Francis the evening of Sept. 24 and the pope told him he had lost trust in him and asked him to step down.

The meeting “was something surreal because yesterday until 6:02 p.m., I thought that I was a friend of the pope,” one who faithfully carried out the pope’s wishes, he said. “And the pope, speaking to me, told me that… read more>>