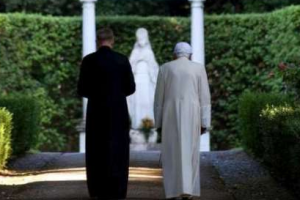 The pope emeritus visited the Pontifical Villas July 25 for the first time in four years, and walked the garden paths where he used to pray, according to Italian media.

Benedict XVI then went to the 15th century Sanctuary of the Madonna of Tufo in Rocca di Papa for a short prayer before traveling to the town of Frascati in the Alban Hills outside of Rome.

In Frascati, Benedict had a private dinner with Bishop Raffaello Martinelli of Frascati at the Bishop’s Palace. Benedict’s private secretary and Prefect of the Papal Household Archbishop Georg Gaenswein accompanied them.

Since his resignation in Feb. 2013, Benedict has led a life of prayer, occasionally consulting with and meeting with his successor. At age 92, he currently resides in the Mater Ecclesiae monastery within Vatican City State, where he has few private meetings with guests for breakfast or lunch.

During his pontificate, Benedict XVI used to spend his summers at the Pontifical Villas in Castel Gandolfo, which was conceded to the Holy See as an extraterritorial possession under the Lateran Pact of 1929.

The villa has served as the papal summer residence since the reign of Pope Urban VIII during the 17th century.

Pope Francis broke the tradition after his election in 2013, choosing to spend his summers in Rome in his residence in Vatican City’s Domus Sanctae Marthae guest house.

The Apostolic Palace in Castel Gandolfo was opened to the public in 2016. Visitors can see the papal library, private study, throne room, consistory hall, and private chapel in the papal residence, as well as the bedroom where Popes Pius XII and Paul VI died.

The Pontifical Villas also have a small farm created by Pope Pius XI, which produces eggs, milk, oil, vegetables and honey either for local employees, or for sale in the Vatican supermarket.

During his stay at Castel Gandolfo in July 2011, Pope Benedict XVI said, “Here I find everything: mountains, the lake, and even the sea; a beautiful church with a renewed façade and good people. For these reasons, I am happy to be here.”