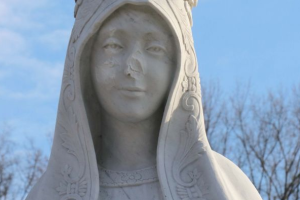 Senseless Attack on Our Lady of Fatima statue at National Basilica Dec 5, 2021

Security-camera footage shows a man attacking a statue of Our Lady of Fatima by cutting off her hands and hammering at her face, according to a statement by the Basilica of the National Shrine of the Immaculate Conception in Washington, D.C.

“We have contacted authorities and, though we are deeply pained by this incident, we pray for the perpetrator through the intercession of the Blessed Virgin Mary under her title of Our Lady of Fatima,” Monsignor Walter Rossi, the rector of the basilica, said of the Dec. 5 incident.

The statue, formed out of Carrara marble, is located in the basilica’s Rosary Walk and Garden. Security personnel discovered the damage when opening up the basilica on Monday morning, Dec. 6.

“Subsequent to reviewing security camera footage, a male was found to have entered the locked garden by scaling its fence Sunday night,” Rossi said. “He then proceeded to cut off the hands of the Blessed Mother and attack her face with a hammer. As he left, he took her hands.”

According to EWTN correspondent Mark Irons, this person also cut off the cross from the top of Mary’s crown and wore a mask. The basilica is not releasing the surveillance video at this time.

In October, the United States Conference of Catholic Bishops (USCCB) found 100 incidents of vandalism reported at Catholic sites in the U.S. since May 2020.

At the time, Cardinal Timothy Dolan of New York and Archbishop Paul Coakley of Oklahoma City, chairmen of the USCCB’s religious liberty and domestic justice committees, condemned the “acts of hate,” but stressed the importance of reaching out to the perpetrators with prayer and forgiveness.

“There remains much we do not know about this phenomenon, but at a minimum, they underscore that our society is in sore need of God’s grace,” they said.