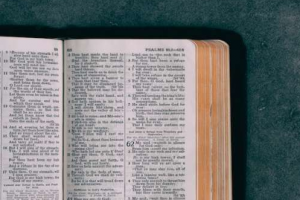 CNA—A Bible once carried by a World War II prisoner of war is the center of a legal fight at a veterans’ medical center in New Hampshire.

The Bible was part of a “Missing Man” table display, honoring prisoners of war and missing soldiers, placed at the entrance of the Manchester Veterans’ Administration Medical Center. The bible was donated to the medical center by a 95 year old veteran and former POW to whom it belonged. The veteran had the Bible while he was a prisoner of war.

A federal lawsuit now argues that the Bible should be removed from display, because it violates the First Amendment by appearing to favor one religion over another.

The suit was filed by U.S. Air Force veteran James Chamberlain, a Christian, after months of back and forth between a group of veterans and the staff of the Manchester Veteran’s Affairs Medical Center over the Bible. According to the New Hampshire Union Leader, 14 veterans and patients of the medical center filed complaints against the Bible with the Military Religious Freedom Foundation (MRFF) in January of this year. These veterans were of varying religions; they were Protestant, Catholic, atheist, agnostic and of other religions, the Union Leader reported.

But by Feb. 23, the MRFF received new complaints that the Bible was back on display, now in a plexiglass case, in the memorial. Chamberlain became the 15th veteran to file a complaint, and then became the plaintiff of the lawsuit, which was filed in U.S. District Court in Concord.

Attorney Lawrence Vogelman, who is representing Chamberlain, sent a letter on March 25 to Alfred Montoya, director of the medical center, asking again for the Bible’s removal. Vogelman received a letter from the Department of Veteran’s Affairs on April 4, which said the display of the Bible did not violate the First Amendment.

Vogelman wrote in the lawsuit that the display of the Bible in the memorial is “just as objectionable” as it would be if “the MVAMC only provided care to Christians, or denied care to non-believers, or those who worship their God in other ways,” the Union Leader reported.

This week, the MRFF arranged for an airplane to tow a banner over the medical center calling for the removal of the Bible.

Curt Cashour, press secretary for the Department of Veterans Affairs, said in a statement that the lawsuit is “nothing more than an attempt to force VA into censoring a show of respect for America’s POW/MIA community.”

“Make no mistake: VA will not be bullied on this issue,” he added.

Cashour told reporters that after the initial removal of the Bible, the medical center received numerous complaints from patients and their families, asking that the Bible be put back. After seeking legal counsel, the medical center decided to put the POW Bible back on display, Cashour said.

“We apologize to the veterans, families and other stakeholders who were offended by the facility’s incorrect removal of this Bible,” he told the Union Leader.

The Missing Man Table was sponsored by the Northeast POW/MIA Network.

First Liberty Institute, a non-profit organization that defends religious freedom, said in a statement that the Northeast POW/MIA Network “should be able to honor and remember those killed, captured or missing with a display that includes a Bible donated by a WWII veteran that represents the strength through faith necessary for American service members to survive,” the Union Leader reported.