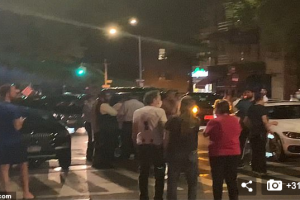 Daily Mail—Furious New York residents honk their horns outside the NYC Mayor’s home in the middle of the night over his refusal to address the constant fireworks across the city keeping them up at night.

New Yorkers fed up with Mayor Bill de Blasio’s inaction in dealing with the noise caused by late-night fireworks that are being set off illegally throughout the city staged a protest outside Gracie Mansion on Monday.

Motorists lined up along East End Avenue on the Upper East Side of Manhattan around midnight late on Monday and honked their horns continuously hoping to get the message across to the mayor.

“If we cannot sleep, we will not let the mayor sleep,” New York City Councilman Chaim Deutsch, who addressed a crowd of protesters on Monday, said.

Deutsch led chants of “If we don’t sleep, you don’t sleep” and, “We need leadership.”

Since June 1, there have been more than 4,500 calls to the police complaining of fireworks in Brooklyn alone.

‘During these trying times, when people are trying to get their lives back together, all you hear is fireworks shooting at people out in the streets,’ Deutsch told Hamodia.

‘People are just afraid to walk out of their homes.’

The councilman said that the police are ‘afraid to do their jobs, because our mayor, our elected officials, are showing rhetoric across the city of not allowing the men and women of the NYPD to do their jobs…. Read more, See videos>>