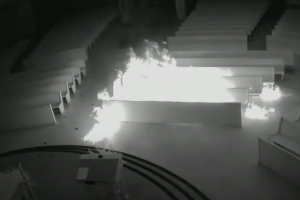 CNA—Police are searching for a man who broke into a Catholic church in Florida on Friday and tried to burn it down. The church’s pastor in a Sept. 20 video urged prayers for the man and thanked God that the church survived the attack.

Surveillance video shows a young man, shirtless and wearing a surgical mask and white gloves, breaking into the church and pouring a jug of clear liquid on several of the wooden pews before setting them alight. He fled as the flames erupted, apparently without stealing anything.

Fire crews responded swiftly to put out the fire, but the sanctuary sustained significant damage, including the loss of the front section of pews. The Hillsborough County Sheriff’s Office is leading a search for the suspect.

Pastor Michael Cormier said during his Sept. 20 Sunday homily that initially he considered closing down the church for the weekend to have work done to restore the pews, canceling the weekend’s Masses.

“But we thought: if we did that, evil would win,” Cormier said.

“We wouldn’t have Mass for one weekend, and evil would win…we have been struck down by this, but not destroyed. In the end, evil never wins.”

Cormier reminded the congregation of the Gospel readings at daily Mass on Sept. 10, from Luke 6:27-38: “…love your enemies, do good to those who hate you, bless those who curse you, pray for those who mistreat you.”

He led the congregation in a prayer of thanks that the “act of evil” did not destroy the church, praying for the assailant “that [God] remove the malice and hatred from his heart.”

“May this terrible act cause us to unify, to love one another more than ever, and to continue to make [our parish] the bedrock of faith and strength it has always been,” Cormier prayed.

Bishop Gregory Parks of St. Petersburg sent his regards and prayers to the parish Sept. 19.

The arson in Town ‘n’ Country is the latest in a spate of attacks against Catholic churches in Florida this year, and across the country.

On the morning of July 11, a man crashed a minivan through the front door of Queen of Peace Catholic Church in Ocala, Florida. He then set the church aflame while parishioners inside prepared for morning Mass.

Police arrested Stephen Anthony Shields, 24, of Dunnellon, Florida later that day. He has been charged with attempted murder, arson, burglary, and evading arrest.

Also in July, an as-yet unidentified assailant beheaded a statue of Christ the Good Shepherd at a parish in the Archdiocese of Miami, in Southwest Miami-Dade County.

In 2019, the co-cathedral of the Diocese of Pensacola-Tallahassee was damaged by fire, with several of the chairs in the sanctuary set ablaze using an accelerant. A 32-year-old man with a history of mental illness was later arrested in connection with the arson.

Elsewhere in the US, several Catholic statues and church buildings have been vandalized this year, including several statues in California of St. Junipero Serra that have been pulled down by mobs.

On July 10, the Diocese of Brooklyn announced that New York City police were investigating the vandalization of a statue of the Virgin Mary at Cathedral Prep School and Seminary in Queens. The next day, local police in Boston confirmed that a statue of the Blessed Virgin, located outside the church of St. Peter’s Parish, had been set on fire and suffered damage.

In September, a man broke at least six windows, beat several metal doors, and broke numerous statues around grounds of a Louisiana parish in a late-night vandalism attack that lasted over two hours. The assailant has since been arrested and confessed to the crime.

Also in September, a vandal entered the sanctuary of St. Patrick’s Cathedral in El Paso, Texas and destroyed a nearly 90-year-old statue of the Sacred Heart of Jesus.

While some attacks on statues, most notably in California, have been committed in public by large groups with clear political affiliations, the perpetrators of other acts, including those against the images of the Virgin Mary and Christ, have not been identified.