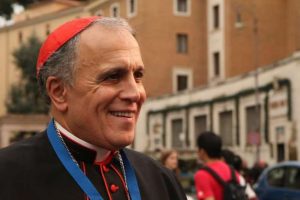 The president of the U.S. bishops’ conference was hospitalized March 15 after suffering a mild stroke, according to a statement from the Archdiocese of Galveston-Houston, which has been led by Cardinal Daniel DiNardo since 2006.

“It is expected that Cardinal DiNardo will remain hospitalized for a few more days of testing and observation, followed by a transfer to another facility for rehabilitation.  He is grateful to the doctors and nurses for their wonderful care and for continued prayers during his recovery,” the March 16 statement said.

“The Cardinal is resting comfortably and conversing with associates, doctors and nurses.”

DiNardo, 69, was ordained a priest of the Diocese of Pittsburgh in 1977. As a priest, he spent six years working in the Vatican’s Congregation for Bishops, and became Bishop of Sioux City, Iowa, in 1998. He became coadjutor bishop of Galveston-Houston in 2004, and was installed as archbishop of that archdiocese two years later.

DiNardo became a member of the College of Cardinals in 2007. He was the first Archbishop of Galveston-Houston to be appointed a cardinal.

The cardinal began in 2016 a three-year term as president of the United States Conference of Catholic Bishops. He served as vice president of bishops’ conference from 2013 to 2016.

The archdiocesan statement said that DiNardo is eager to resume his duties. According to the statement, DiNardo said today that “with so much to do, I am looking forward to getting back to work as soon as possible.”