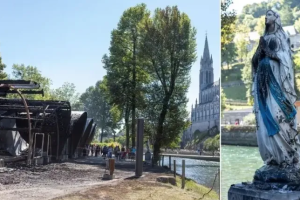 Fire Destroys Half of Chapels of Light at Lourdes Shrine

CNA—Half of the Chapels of Light at Our Lady of Lourdes shrine in France were destroyed by a fire during the night of July 10–11. The fire was quickly brought under control.

“Another hard blow for the Shrine at Lourdes, which didn’t need it,” tweeted Father Olivier Ribadeau Dumas, rector of the Sanctuary of Our Lady of Lourdes, lamenting the destruction.

“But the main thing is that there were no injuries and that pilgrims can continue to pray in the chapels that remain and continue to light candles,” he wrote.

In a statement, the shrine estimated damages to be a little more than $1.5 million.

An internal investigation was opened, but the cause of the fire is thought to be an accident, according to La Croix International, a French Catholic newspaper. Vincent Neymon, director of communications and resources for the Lourdes sanctuary, speculated that the wind caused a candle to ignite the wooden frame of one of the chapels.

Located since 2018 on the bank opposite the place where the shrine’s baths are located, the Chapels of Light are one of the quietest places for recollection, next to the grotto of the apparitions.

The four out of eight chapels that were destroyed are located further down the river that runs through the grounds of the shrine. The last two chapels are the ones that have been used so far to place the heaviest and largest candles.

Also damaged was the statue of Our Lady situated next to the river facing the Chapels of Light. Many pilgrims confidently leave their rosaries in her hands. Each year, 380 metric tons of candles are used in these chapels.

Although the activity of the Lourdes shrine has gradually picked up since the pandemic, it has barely recovered half the number of regular visitors it had before 2020. While diocesan pilgrimages of the sick from all over the world have slowly begun to return to the shrine, they have been smaller in number as a precaution.