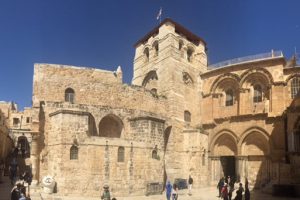 After Taxing Ordeal, Church of Holy Sepulchre Reopens in Jerusalem

JERUSALEM  (CNA/EWTN News)—Christian leaders re-opened the Church of the Holy Sepulchre in Jerusalem (pictured left) after the city backtracked on proposals seen as targeting Christianity in the region. On Feb. 25, Catholic, Greek Orthodox and Armenian church leaders jointly decided to close the sacred site indefinitely, protesting two controversial proposals in the city.
The proposals would have allowed the government to claim land that was sold by Churches to private organizations in recent years, and would have also removed tax exemptions from Church-owned properties that did not contain houses of worship, such as schools, hospitals, and social outreach centers.
However, Prime Minister Benjamin Netanyahu of Israel intervened in the dispute and worked with Jerusalem’s mayor, Nir Barkat, to “formulate a solution to the issue of municipal taxes on buildings belonging to the churches that are not houses of worship,” according to the Washington Post.
Additionally, deliberations on the land bill have been delayed, and its author says it will be reworded to clarify Church tax exemptions.
In a statement released on Feb. 27, the religious leaders gave “thanks to God for the statement released earlier today by Prime Minister Netanyahu and offer our gratitude to all those who have worked tirelessly to uphold the Christian presence in Jerusalem and to defend the Status Quo.”
“After the constructive intervention of the Prime Minister, the Churches look forward to engage with Minister Hanegbi, and with all those who love Jerusalem to ensure that Our Holy City, where our Christian presence continues to face challenges, remains a place where the three Monotheistic faiths may live and thrive together,” the statement continued.
The leaders announced that the church – a holy site believed to contain the locations of Christ’s crucifixion, burial and resurrection – will officially re-open its doors on Feb. 28 at 4:00 a.m.