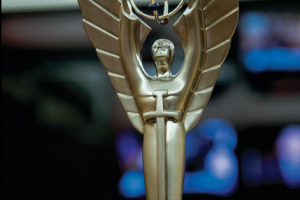 The Gabriel Awards are presented annually by the Catholic Press Association and honor both secular and religious film, television, radio and digital media outlets for “outstanding artistic achievement in media that entertains and enriches with a true vision of humanity and a true vision of life.”

“EWTN News Nightly with Lauren Ashburn” swept the “TV, News and Informational, National Release” category of the 2018 Gabriel Awards winning first place, second place, and an honorable mention for its on-the-ground coverage in Iraq. First place went to Anchor Lauren Ashburn’s interview with a Catholic priest from Michigan, who moved to Erbil, a town in Northern Iraq, to minister to war-weary Catholics and other Christians and to give them hope. According to the Gabriel judges: “The selflessness of this priest and the timeliness of the story make it a real winner.” (www.youtube.com/ewtn)

A story about residents returning to areas liberated from ISIS and conditions on the ground in Iraq was honored with a second place win, while “EWTN News Nightly” was given an honorable mention for a story about Batnaya after the expulsion of ISIS by Kurdish fighters.

“EWTN has given considerable attention to the plight of Christians in the Middle East, so it was gratifying to see Lauren Ashburn and videographer Tom Haller recognized for their incredible work in Iraq covering stories on Catholics dealing with the devastation wrought by ISIS,” said EWTN Chairman and Chief Executive Officer Michael P. Warsaw. “I was especially pleased to see the judges recognize the Network’s efforts to provide viewers with news they will not see anywhere else.”

“Called and Chosen – Father Vincent R. Capodanno,” an EWTN original docudrama, also garnered a first place award in the “TV, Religious, National Release” category. The program depicts the life of a former Maryknoll missionary turned military chaplain, who died at the age of 38 on the killing fields of Vietnam administering the sacraments and pulling others to safety. The judges called the program “[b]eautiful, heart wrenching and inspiring.” (http://bit.ly/CalledandChosen)

The Network also garnered an Honorable Mention for Episode 2 of its blockbuster series, “The Message of Fatima.” The episode, which aired during Fatima’s 100thanniversary, dramatizes Our Lady of Fatima’s first apparition. (http://bit.ly/TheMessageOfFatima)

“For several years now, EWTN has been focused on creating more original, high quality movies, documentaries, and docudramas,” Warsaw said. “That’s why we are especially pleased that the Gabriels honored ‘Called and Chosen – Father Vincent R. Capodanno’ with a first place award for its depiction of the inspiring life of this heroic priest, as well as ‘The Message of Fatima.’ These two docudramas were EWTN viewer favorites.”

Finally, EWTN Radio won a second place Gabriel in the “Radio, Religious, National Release” category for “Take Two With Jerry & Debbie.” Said Warsaw: “We hope this award helps more people to discover one of our most popular radio shows!”

EWTN Global Catholic Network, in its 37th year, is the largest religious media network in the world. EWTN’s 11 TV channels are broadcast in multiple languages 24 hours a day, seven days a week to over 275 million television households in more than 145 countries and territories. EWTN platforms also include radio services transmitted through SIRIUS/XM, iHeart Radio, and over 500 domestic and international AM & FM radio affiliates; a worldwide shortwave radio service; the largest Catholic website in the U.S.; electronic and print news services, including Catholic News Agency, “The National Catholic Register” newspaper, and several global news wire services; as well as EWTN Publishing, its book publishing division.