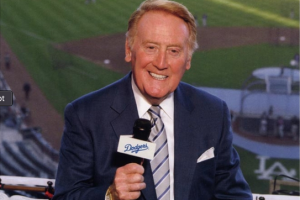 “Vin Scully has lived through tragedies that would have crushed or embittered others: the death of a wife; the death of a son. He openly credits the Catholic faith with which he grew up in the Bronx as his life’s anchor. You can find him on Sunday at St. Jude the Apostle Church in Westlake Village, California, being fed by word and sacrament before he brings a lifetime of learning and that melodious voice into the homes, cars, and ear-buds of millions later in the afternoon, from his post behind the microphone at Chavez Ravine.”

He is considered by many to be the greatest baseball broadcaster of all time according to audience rankings, the Bleacher Report and Fox Sports.

Yes, he called for other professional sports, including nationally televised football and golf, but baseball, and the Dodgers especially, were his sweet spot.

A man of purpose and principle

Vin Scully prepared for each game. He was purposeful in his choice of words and stories. For example, he never referred to Dodger or sport devotees as “fans,” which he said was short for “fanatics.” Instead, he called them “friends”.

In 1972, just 15 years into their marriage, Scully’s 35-year-old wife, Joan, died of an accidental medical overdose. They had one son at the time. In late 1973, Scully married Sandra Hunt, who brought two children of her own into the marriage. Soon they had one more.

Years later, Scully’s eldest son, Michael, died in a helicopter crash at age 33, while working for a company. He was inspecting oil pipelines near Fort Tejon, California, in the immediate aftermath of the Northridge earthquake of January 1994.

“Although Michael’s death long haunted him, in numerous interviews, Scully credited his Catholic faith and being able to dive back into his work with helping him east the burden and grief of losing his wife and son,” cited sources recount in Wikipedia.

“Her prayers are more powerful than those of the rest of heaven combined,” Scully said, speaking about devotion to the Virgin Mary. “No one was closer or more devoted to Christ on earth, so it only makes sense to see the same thing in heaven. Now, the Blessed Virgin seeks to help her spiritual children get home to spend eternity with her Son.”

In November 2017, Scully stated that he would “never watch another NFL game again,” due to some of the league’s players kneeling during the playing of the national anthem prior to games, as quoted in Sports Illustrated, November 5, 2017.

Born in Brooklyn, in the Washington Heights section of Manhattan,Vin Scully was 100% American, of Irish descent. His father died of pneumonia when Scully was just 4. Later his mother remarried and Scully considered this man, an English merchant sailor named Allan Reeve, his “dad.”

At age 8, Scully began his life-long love affair with baseball. It started at a laundromat, where he watched the second game of the 1936 World Series. He later admitted to feeling sympathetic for the roundly defeated NY Giants. It didn’t matter. He was hooked.

As a member of the NYC Police Athletic League and Catholic Youth Organization (CYO), the young Vin Scully was able to attend professional games and became, as he put it, “a very big Giants fan.”

He attended Fordham Preparatory School in the Bronx, served in the U.S. Navy for two years, and then entered Fordham University, where he quickly became a student broadcaster and journalist, majoring in English.  At Fordham, Scully helped start the school’s FM radio station, was assistant sports editor for a volume of the University’s magazine in his senior year, sang in a barbershop quartet, played center field for the Fordham’s baseball team and also called radio broadcasts for the University’s baseball, football and basketball games.

A true professional, even young and half-frozen

After graduation, Scully sent about 150 letters to radio stations along the East Coast. Only one responded—only ONE—and he accepted a position as a fill-in broadcaster for CBS radio affiliate WTOP in Washington, D.C..

Red Barber, sports director of CBS Radio Network, recruited Scully for college football coverage. Things went well, but it was Scully’s coverage of a November 1949 University of Maryland vs. Boston University football game from the frigid (literally) Fenway Park in Boston that stuck with his boss and took Scully to the next level.

At that 1949 game, Scully assumed he’d be broadcasting from an enclosed press box so he left his coat and gloves in the hotel room. Bad decision. He had to broadcast from the stadium roof!  He was freezing. But he never mentioned it on air. The young Scully just did his job, well.  That’s a level of professionalism a boss doesn’t forget.

Barber began mentoring Scully, telling him that if he wanted to be successful as a sports announcer, he should never show open partiality to the team that hired him, never listen to other announcers, and keep his opinions to himself. Scully took the mentoring to heart.

Scully began broadcasting for the then-Brooklyn Dodgers in 1950.

He became the youngest person to broadcast a World Series (a record to this day) in 1953 and Scully became the Dodger team’s principal announcer in 1954.

Seven years after joining the Dodgers’ organization, the team moved to Los Angeles. Scully moved with them.

At the time, the Los Angeles Memorial Coliseum was exceptionally large and inexperienced baseball viewers had a difficult time following the game.  Vin Scully broadcast such masterful play-by-play and story-telling in between that it became common for fans to bring transistor radios with them to the games so they could hear Scully and his co-announcer describe the action, a habit that continued when the team moved to a smaller stadium. In a nutshell, southern California embraced the new Dodgers announcer with open arms.

Culling from “MONDAY TAKES MIKE ON DODGER BROADCASTS”. Deseret News. July 9, 1993. Retrieved September 28, 2021, Wikipedia does a good job of painting a picture of Scully’s unique sportscasting style and unique interaction with his broadcast partner, as well as recounting one of Scully’s most difficult broadcasts ever.

“Unlike the modern style in which multiple sportscasters have an on-air conversation (usually with one functioning as play-by-play announcer and another as color commentator),” Wikipedia writes, “Scully and his broadcast partners Jerry Doggett (1956–87) and Ross Porter (1977–2004) each called their innings solo, rotating between radio and television, with Scully working the entire game except for the 3rd and 7th innings. When Doggett retired after the 1987 season, he was replaced by Hall-of-Fame Dodgers pitcher Don Drysdale, who previously broadcast games for the California Angels.”

Here is the description of what was one of Scully’s most difficult broadcasts:

“Drysdale died in his hotel room following a heart attack before a game against the Montreal Expos in 1993, resulting in a very difficult broadcast for Scully and Porter, who were told of the death but could not mention it on-air until Drysdale’s family had been notified and the official announcement of the death made.[19] Scully announced the news of his death by saying, “Never have I been asked to make an announcement that hurts me as much as this one. And I say it to you as best I can with a broken heart.” Former outfielder Rick Monday succeeded Drysdale in the Dodgers’ broadcast crew.

After 66 years straight announcing for the Dodgers, Scully announced the next year would probably be his last, saying candidly, “I mean, how much longer can you go on fooling people? So yeah, I would be saying, ‘Dear God, if you give me next year, I will hang it up.”

In 2016, Scully retired at age 88, ending his record-breaking run as the team’s play-by-play announcer, the longest tenure of any broadcaster with a single team in professional sports history.  He was second only to Tommy Lasorda (renown Dodgers manager and another devout Catholic) in number of years associated with the Dodgers organization in any capacity. Lasorda’s tenure with the team was merely two years longer than Scully’s.

Ingrained in my memory forever

There are so many examples of Scully’s ability to put listeners in the moment, in the game, on the field.  Too many to list here, except for one..

“I’m not a sports fanatic by any stretch of the imagination,” says Catholic Business Journal publisher K.A. Walker, “but Gibson’s Hail Mary home run during Game 1 of the 1988 World Series is ingrained in my memory forever. Just fantastic!  And a big part of that moment was the way Scully announced it.”

“Scully was so attentive to the moment, the action, and the listener’s experience, that his discipline included restraint and humility,” Walker continues. “He paced things so you, as a listeners could experience it as though you were there, live. In otherwords, if attendees were collectively holding their breath to see if a fielder would catch a fly or a player would make it to a base safely, then Scully held his breath too. He didn’t over talk it.”

Here’s the ingrained-in-the-memory call mentioned above. Kirk Gibson’s famous home run, Game 1, 1988 World Series.  Keep in mind, in this game, Gibson was injured and there was some concern he wouldn’t be able to make it around the bases even if he did slam the ball out of the park. He did not have another player run for him.

Scully said nothing for over a minute, allowing the pictures (on the television) to tell the story. Finally, he said:

“In a year that has been so improbable…the impossible has happened!”

Broadcasting his last MLB game from San Francisco’s then-named AT&T Park,  it was Game 5 of the 1989 National League Championship Series between the San Francisco Giants and Chicago Cubs, in October.

After the game, Scully offered a prayer and final message:

You and I have been friends for a long time, but I know in my heart that I’ve always needed you more than you’ve ever needed me, and I’ll miss our time together more than I can say. But you know what? There will be a new day and eventually a new year. And when the upcoming winter gives way to spring, rest assured, once again it will be “time for Dodger baseball.” So this is Vin Scully wishing you a very pleasant good afternoon, wherever you may be.

Thank you for remaining anchored in your Catholic Faith and in the power of prayer and the Rosary throughout your life even through the massive challenges and joys it brought for you along the way. Thank you for bringing your best to your call in life.

May you Rest In Peace. Amen.