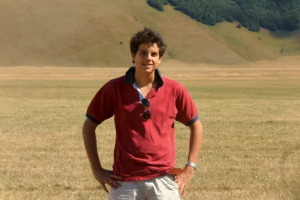 CNA—On the 29th anniversary of the first Eucharistic miracle that took place in the Archdiocese of Buenos Aires’ Santa María parish, the community received a first class relic of Blessed Carlo Acutis.

Three Eucharistic miracles have taken place in this parish, in May 1992, July 1994, and August 1996. The history and investigation of these events are included in the Eucharistic Miracles of the World exhibition designed and created by Bl. Carlo Acutis.

The relic was received at a May 8 Mass.

The pastor of Santa María, Fr. Alberto Sorace, said, “it’s no small thing that this Eucharistic sign happened on the feast day of the Virgin of Luján”.

“We are in a time of tremendous grace” because despite the pandemic and the difficulties “the faith remains firm,” individually and as a community.

And “not because of our merits, God entrusted us with this sign that becomes a task, a challenge,” Fr. Sorace said.

“As confirmation of this journey travelled, the Lord gives us the presence of the blessed” as “a companion on the journey”, so he can “help in this transmission, in this narration of the events that occurred. A verbal narrative that is transmitted with fidelity,” but “that also has to be translated not only into a sign, but also into deeds.”

The pastor thanked the laity who arranged for the relic to come to the parish and gave each of them a third class relic of Blessed Acutis.

On the feast of the Assumption in 1996, a host fell to the ground during the distribution of Communion and was placed in a container with water to dissolve. Ten days later it had transformed into blood.

An analysis conducted by Professor Ricardo Castañón Gómez revealed the presence of human DNA and blood.

In 2000, tissue expert Dr. Robert Lawrence found that the samples had human skin and white blood cells. After further studies had been performed by additional experts, in 2003 Lawrence concluded that the tissue was that of an inflamed heart, which means that “the person to whom it belonged must have suffered a lot.”

In 2005, Castañón Gómez asked another expert, Professor Frederick Zugibe of Colombia University, to investigate. The scientist identified the tissue as coming from the left ventricle, and determined it to be living tissue that came from a suffering person.

Castañón Gómez concluded that through this miracle “the Lord wanted to show us his myocardium, which is the muscle that gives life to the whole heart, just as the Eucharist does with the Church. And why the left ventricle? Because that’s where the purified blood comes from and Jesus is the one who purifies his Church from her sins.”