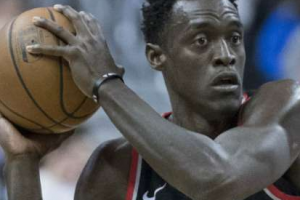 Pascal Siakam: Toronto Raptors star got his start in seminary

CNA—When Toronto Raptors forward Pascal Siakam entered Game 3 of the NBA Finals Wednesday night, he crossed himself and then pointed upward to the sky. The cross helps him remember to give glory to God. The finger point is for his dad.

Siakam is not like most NBA players. He’s played basketball for only nine years. He grew up preferring soccer. And when he first put on a jersey to shoot hoops, Siakam was a seminarian in Cameroon.

Siakam was a reluctant seminarian. At 11, he began St. Andrew’s Seminary School in Bafia, Cameroon, because his father wanted him to go. He never considered defying his father, who, Siakam told ESPN last year, was the best man he had ever known.

But Siakam was reluctant enough about attending seminary that he made a habit of breaking the rules, hoping the seminary’s director, Father Armel Collins Ndjama, would dismiss him.

“He turned from a very calm child into a very stubborn boy,” Father Collins told ESPN in December 2018.

“At times, I considered dismissing him, but his academic results were so remarkable, we kept him.”

And Siakam thinks that seminary left an impact on his life.

It instilled discipline in young Siakam, which, he said, helped him to succeed later in college and then with the Toronto Raptors.

Seminarians at St. Andrew’s were woken up at 5:30 a.m. to start the day with Mass before proceeding to their daily morning chores. They chopped wood, washed dishes, and cleaned laundry with a wooden washing board.

After chores, the students began classes and then returned to church.

They had one hour of recreation, daily from 5 to 6 p.m. The vast majority of the students preferred soccer to playing basketball. The only hoop was crooked, and sat on a crumbling court.

Siakam fell in love with soccer. He almost completely disregarded basketball. But he did attend basketball camps: first one near the seminary, and then one in South Africa. He went mostly so he could visit a sister who lived nearby. While he was there, he was recruited to play basketball in the U.S. He couldn’t say no.

Siakam’s father died in 2014, while the basketball star was beginning his career at New Mexico State University.

Lifelong Lessons from his father and from the Seminary

The lessons of his father’s life stay with Siakam. And although he spent a lot of time trying to get kicked out, Siakam told ESPN that seminary “was the best thing that ever happened to [him].”

That was the hope of Fr. Collins, who knew that Siakam was likely not called to the priesthood.

Fr. Collins told ESPN in December that, “I knew we would probably not be able to train him to be a priest, but I still hoped we could teach him to be a man.”

Before seminary, Siakam claims he could not make his own bed, wash dishes, or even do his own laundry.

He was the last in his family —“the kid”— so he “didn’t have to do anything,” as his mother made his older siblings do nearly every chore for him if she didn’t do it herself, he described on the Woj Pod podcast.

Seminary “helped me focus on myself and try to better myself and work hard for what I wanted,” he continued. “It could have been easy for me to be the type of kid that didn’t work for what he wanted cause as a kid, I had everything I needed.”

“I think I know why my dad made me go,” he wrote in 2016 on The Players’ Tribune. “He was giving me all the tools I’d need to succeed. Just as important as his dream for his son to play in the NBA was his desire for me to become my own man.”