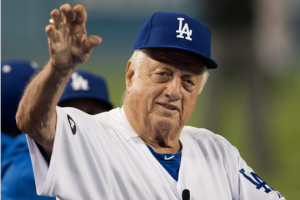 OBIT: Tommy Lasorda – You may not be “Dodger Blue” but ya gotta love Tommy, Baseball, and Tommy’s Catholic Faith

Dodger Blue lost a legend this month, its famed manager Tommy Lasorda died on January 8, 2021.  Having recently been released from a two-month hospital stay, Lasorda suffered a sudden cardiopulmonary arrest at home. He was 93.

Tommy Lasorda may have passed on to his eternal reward, but he won’t be forgotten on earth.

Tommy Lasorda made it happen

Tommy Lasorda wasn’t just a record-breaking, Hall of Fame championship manager for the Los Angeles Dodgers, he was among the biggest fans of baseball—especially Dodger baseball—in the history of baseball.

For the Dodgers, Lasorda was everything. He was the face of the team in many ways — serving as a player in Brooklyn for a few years, then for more than 20-years as an inspirational, motivational and in-the-spotlight manager, always a most loyal fan and promoter, a mascot, and so much more.

“I bleed Dodger Blue,” he said years ago, “and when I die, I’m going to the big Dodger in the sky… I’ll see all the great Dodger players that are up there…”

Born with a lively, big-hearted, tell-it-like-it-is Italian personality, Lasorda developed a passion for baseball at a young age, that ripened into focus, a solid sense of humor and tremendous leadership capability.

He knew what he was put on earth to do and he did it. Lasorda spent more than seven decades—more than 70 years—with the Los Angeles Dodgers, holding various roles.

He never looked elsewhere.  He loved what he did.

“Tommy wasn’t just a manager, he was an institution” says author Jason Turbow, author of They Bled Blue, in an interview with Jeff Spiegel. “Tommy’s whole brand was how he loved the Dodgers, and everybody knew it.”

Half the battle is just showing up

Lasorda started out with the Dodgers, in Brooklyn, NY, in 1948.  A left-handed pitcher, selected from the Philadelphia Phillies in the Minor League Draft, he enjoyed three stints as a player with Brooklyn.

After that, he never left the Dodgers, serving as scout until 1965.

Lasorda went on to become a Minor League manager and third base coach for the Dodgers under Walt Alston.

When Alston announced his retirement in September 1976, Lasorda was promoted to Dodgers manager. There he stayed, always in the spotlight, until July 1996, when he retired—not from the Dodgers, but from his role as manager—due to health issues.

In his two decades at the helm, as manager, Lasorda compiled a 1,599-1,439 record, leading the Dodger franchise to eight—EIGHT!—National League West division titles, four-FOUR!—National League pennants and TWO World Series championships in 1981 and 1988.

“He is a great motivator,” says former Dodgers catcher Rick Dempsey, “He could make guys play above their talent level.”

After retiring from manager duties, Lasorda served a number of positions in the Dodger’s front office, including VP from 1996 to 1998 and interim general manager in 1998.

For a small window of time Lasorda left retirement to lead the U.S. team at the 2000 Olympics in Sidney, leading them to the Gold Medal over Cuba.

“Lasorda un-retired in 2000 to coach a rag-tag U.S. Olympic baseball team made of rising minor players and aging ex-major leaguers. When the U.S. stunned Cuba to win the Gold Medal, baseball pundits called it “the miracle on grass,” noted a CNN reporter.

The following year he served as a third base coach in the 2001 MLB All-Star Game. After 2001, Lasorda maintained the position of special advisor to the chairman, often attending games at Dodger Stadium.

Tommy Lasorda is Catholic to the core, as one journalist put it.  On Sundays, he would make sure that a priest came to Dodger stadium in the morning to offer Mass for Catholic players.

When asked what it takes to be a good Catholic in today’s cutthroat world of athletics, Lasorda responded quickly.

“I think if you have faith in God, then God will do a lot of things for you,” he added. “Go to Mass and go to confession and confess your sins.  That’s what it takes to be a good Catholic.”

Lasorda’s wife, Jo, was raised a Baptist. Her mother wasn’t pleased with her decision to marry Lasorda and warned her she’d have to get married in the Catholic church, and her children would grow up Catholic.  But the future Dodgers manager said that his wife didn’t waver, recounting the words she replied to her mother, ‘I don’t care. I want to marry him.’  And so she did. They were married for more than 70 years.

a lot of people to help. So if He could see and help me a little bit, I would appreciate it, but I don’t expect Him to do anything for me, because He’s got to do certain things that are more important than me.”

His office prominently displayed a large, gold-framed, can’t-be-missed portrait of Saint Mother Teresa—strategically placed at eye level, below a photo of he and his wife, to be seen by him at all times as he sat at his desk—a stand-out image next to the many baseball pictures that lined his back wall.

God bless you, Tommy Lasorda!  And may eternal rest and peace be yours.