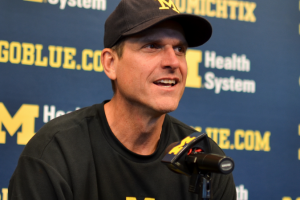 Michigan Football Coach Jim Harbaugh Slams Abortion: “Have the Courage to Let the Unborn be Born”

USA Today, LifeSite News—University of Michigan football coach Jim Harbaugh is speaking out against killing babies in abortions. He appeared at a pro-life event on Sunday where he was the keynote speaker and shared from his heart about the value of human life.

According to the Detroit Catholic publication, Harbaugh and his wife, Sarah, were speakers at the Plymouth Right to Life event at the Inn at St. John’s, designed to raise money for several pro-life charities and programs in southeast Michigan.

“In God’s plan, each unborn human truly has a future filled with potential, talent, dreams and love,” Harbaugh said. “I have living proof in my family, my children, and the many thousands that I’ve coached that the unborn are amazing gifts from God to make this world a better place. To me, the right choice is to have the courage to let the unborn be born.”

“I believe in having the courage to let the unborn be born,” Harbaugh said, according to the Detroit Catholic. “I love life. I believe in having a loving care and respect for life and death. My faith and my science are what drives these beliefs in me.”

Harbaugh, the father of seven including Jay, one of his assistant coaches at Michigan, said his views on abortion were shaped by his own parents

“Passions can make the process messy, but when combined with respect, it ultimately produces the best outcomes,” Harbaugh said according to the Detroit Catholic. “This process has been passionate and messy, but I have faith in the American people to ultimately develop the right policies and laws for all lives involved. I recognize one’s personal thinking regarding morality of a particular action may differ from their thinking on whether government should make that action illegal. There are many things one may hold to be immoral, but the government appropriately allows because of some greater good or personal or constitutional right.”

This isn’t the first time the coach has spoken out publicly against abortion.

Harbaugh discussed his thoughts on abortion in a podcast hosted by National Review senior editor Jay Nordlinger in 2020. He continued: … Read more>>