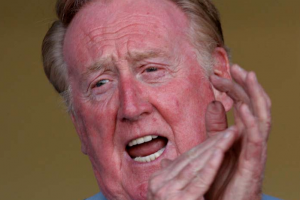 Early in the season, A Tribute to Catholic baseball sportscaster Vin Scully

Renown Catholic baseball announcer Vin Scully is known as much for his faith and common sense approach to life as for his unique and passionate sports announcing. Now retired and age 91, Scully is best known for his 67 seasons calling games for Major League Baseball’s Los Angeles Dodgers, beginning in 1950 (when the franchise was located in Brooklyn) and ending in 2016. His run constitutes the longest tenure of any broadcaster with a single team in professional sports history, and he is second only to Tommy Lasorda (by two years) in terms of number of years associated with the Dodgers organization in any capacity. He retired at age 88 in 2016, ending his record-breaking run as their play-by-play announcer. Enjoy!—ed.

He’s been dubbed: “The Poet-Philosopher of Baseball,” “A Voice for the Ages,” “The Velvet Voice.” He’s been compared to Walter Cronkite, Mark Twain, and Garrison Keilor.

Vin Scully may be the very model of sartorial perfection, but it’s not the wardrobe that has endeared him to baseball for sixty-seven years. It’s his deep baritone voice and the power of his words.

There’s much to be said for childhood dreams.  At eight, when he wrote an assignment about his future, Vin imagined himself as a sports commentator. That dream has come true.

Vin Scully was born in the Bronx, N.Y. and received his elementary school education from the Sisters of Charity.  At Fordham Prep and Fordham University, both conducted by the Jesuits, his eager mind opened itself wide to the liberal arts, to Latin and Greek, science, literary and refining arts. He acted in plays, engaged in debate, learned to read and write well, and above all, to speak well; this is eloquentia perfecta, the hallmark of Jesuit education. When his head was not in books, he took up menial jobs to make ends meet delivering beer, pushing garment racks, and cleaning silver in the basement of the Pennsylvania Hotel in New York City. Vin Scully, the Renaissance man graduated from Fordham in 1949 with a major in communications.

With the Brooklyn Dodgers

In 1947, baseball executive Branch Rickey signed Jackie Robinson to play infield on the Brooklyn Dodgers team.  Against a tide of opposition, Rickey was determined to integrate the ball club.  Against a tide of opposition, the all-round athlete broke the color barrier in major league baseball at a great personal cost to him and his wife Rachel.  If you wanted to see electricity personified, you went to Ebbets Field where you could fix your eyes on Jackie at home plate and on the base pads tantalizing the opposing team.  There was nothing like it.  Said Rickey, “There was never a man in the game who could put mind and muscle together quicker than Jackie Robinson.”

Three years later, a twenty-two year old Vin Scully joined veteran Dodgers announcers, Red Barber and Connie Desmond to complete the broadcasting team.  As the rookie, Scully was assigned to announce only two innings.  Before long, he was announcing World Series games. He was not yet thirty.

Scully called Jackie Robinson “perhaps the most exciting, most driven player I’ve ever seen.” He spoke fondly of two other players:  “Gil Hodges was probably my all-time favorite.  He was as straight an arrow as they come.”  Duke Snider was “a true star. Subject to teasing from teammates. Great talent.”

When, in 1955, the Brooklyn ‘Bums’ won their only World Series, Scully stood and proclaimed: “Ladies and Gentlemen, the Brooklyn Dodgers are the champions of the world.”

In 1957, the Dodgers relocated from Brooklyn to Los Angeles.  For years, Walter O’Malley, the team’s major co-owner, had been searching for a more suitable land on which to build a new ballpark. When he and Robert Moses, the controversial construction coordinator of New York City, could not agree on a real estate price for a new Brooklyn location, O’Malley lost no time in accepting the offer of Los Angeles officials to purchase land suitable for building the ballpark he had wanted to build in Brooklyn.  Their departure triggered a virtual depression in Brooklyn.  The fans lost not only their team but also their beloved announcer.  Scully had pledged his loyalty to the team and followed them to Los Angeles.

When, in 1959, the Los Angeles Dodgers honored Roy Campanella, one of the stars on the Brooklyn team, he was wheeled onto the field for a ceremony of lighting candles in his honor.  (He had been injured in a car accident leaving him paralyzed.) Vin Scully stood, and in tribute, spoke these memorable words:

“The lights are now starting to come out, like thousands and thousands of fireflies, starting deep in center field, glittering to left, and slowly, the entire ballpark. A sea of lights at the Coliseum. Let there be a prayer for every light, and wherever you are, maybe you, in silent tribute to Roy Campanella, can also say a prayer for his well-being. Campanella, for thousands of times, made the trip to the mound to help somebody out: a tired pitcher, a disgusted youngster, a boy perhaps who had his heart broken in the game of baseball. And tonight, on his last trip to the mound, the city of Los Angeles says hello.”

In May, 2000, Vin Scully received an Honorary Doctorate of Humane Letters from Fordham University. In his address to the graduates, he shared some memories of his years at Fordham.  . . . “I was once you.  I walked the halls you walked.  I sat in the same classrooms.  I took the same notes and sweated out the final exams.  I played sports on your grassy fields. I hit a home run here—in Jack Coffey Field against CCNY—the only one I ever hit.”

Fordham, he said, evoked three words for him: home, love and hope. Home, because he spent eight years at Fordham both in the preparatory school and as an undergraduate. Love, because he made lifelong friends, and hope because Fordham is where his dreams thrived.

He urged all present “to take some time away from the craziness around you to foster the things that are important. Don’t let the winds blow away your dreams or your faith in God. And remember, sometimes your wildest dreams come true.”

In presenting the award, Michael T. Gillan, dean of Fordham College of Liberal Studies, noted that “when Jesuit schoolmasters developed their plan of studies in the 16th and 17th centuries, they defined “the goal of Jesuit education as eloquentia perfecta … which connotes a mastery of expression that is informed by good judgment and consistent principles. Those Jesuit schoolmasters of another age, if they had known anything about baseball, would certainly have approved the rhetorical gifts of the man who has been the voice of the Dodgers for the past fifty-one years, Vincent E. Scully.”

For years, every Scully broadcast has repeated the same avuncular opening:  “It’s time for Dodger baseball! Hi, everybody, and a very pleasant afternoon/evening to you, wherever you may be. Pull up a chair and relax;” The poet-philosopher announced the games painting vivid word pictures with his musical voice, tinged with Irish inflection.

Scully held himself to three rules:  Avoid criticizing managers and umpires; keep your personal opinions to yourself; avoid using clichés to describe a play. The Scully trademark, he insists, is silence—silence to allow the roar of the crowd to touch the listening audience.

Scully in His Own Words

There are numerous quotes attributed to Mr. Scully. In describing Tom Glavine as a strike-out pitcher, he mused: “He’s like a tailor, a little off here, a little off there, and you’re done, take a seat.” The talent of Stan Musial of the St. Louis Cardinals amazed Scully:  “How good was Stan Musial? He was good enough to take your breath away.”

Vin was known to spin some philosophy out of the play at the moment.  In 1991, he remarked: “Andre Dawson has a bruised knee and is listed as day-to-day (Pause).  Aren’t we all?”

Then there were his philosophical quips: “Good is not good enough when better is expected.” “Statistics are used much like a drunk who uses a lamp post—for support, not illumination.” “Losing feels worse than winning feels good.”

One day, when Vin joked that Joe Torre might be apprehensive about returning from third base to catcher after getting hit by a foul tip.  “If he were apprehensive, Torre would forever be known as “Chicken Catcher Torre.”  At this, the crowd groaned.

Vin Scully has not been one to wear his feelings in the open.  Yet, he has experienced two family tragedies.  In 1972, after fifteen years of married life, his wife died from an accidental medical overdose.  The next year, his thirty-three old son Michael was killed in a helicopter crash while working for the ARCO Transportation Company.  A chemist, he was inspecting oil pipelines for leaks near Fort Tejon.

Vin credits his strong Roman  Catholic  faith for helping him cope with family grief and then to resume his work as an announcer. “As long as you live,” he reflects, “keep smiling because it brightens everybody’s day.”

The longevity of Vin Scully’s baseball life has drawn to a conclusion.  As part of a conference call before the Dodgers played the Giants on Sept 19th, Scully he spoke about all the attention he had received in the closing days of his long career: “First of all, I attribute it to one thing and one thing only,” Scully reflected, “God’s Grace to allow me to do what I’ve been doing for 67 years. To me, that’s really the story. Not really me, I’m just a vessel that was passed hand-to-hand, down through all those years. So I don’t take it to heart as some great compliment. I just realize that because I’ve been doing this for 67 years, that’s why everybody wants to talk about it. So I think I’ve kept it in proper perspective” (Courtesy of MLB Network).

Finally, a favorite Irish prayer and blessing from Mr. Scully:

May God give you for every storm, a rainbow,
For every tear, a smile,
For every care, a promise,
And a blessing in each trial.
For every problem life send,]
A faithful friend to share,
For every sigh, a sweet song
And an answer for each prayer.

Sr. Joan L. Roccasalvo, a member of the Congregation of St. Joseph, Brentwood, NY, holds degrees in philosophy (Ph.L), musicology (Ph.D.), theology (M.A.), and liturgical studies (Ph.D). She has taught at all levels of Catholic education and writes with a particular focus on a theology of beauty and the sacred arts. Her e-mail address is [email protected]