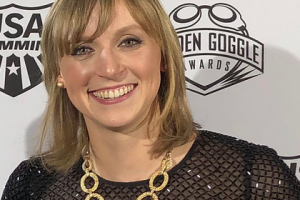 CNA—American Olympic swimmer Katie Ledecky will be leaving Tokyo with four medals, making her the most decorated female swimmer of all time – and her Catholic alma maters are proud.

In the Olympic games in Tokyo, Ledecky, 24, won the gold medal in the first-ever women’s 1,500-meter freestyle, as well as in the 800 free. Ledecky

Ledecky is a native of Maryland and an alumna of Stone Ridge School of the Sacred Heart, an all-girls independent Catholic school in Bethesda. She was joined on Team USA by fellow Stone Ridge alumna Phoebe Bacon. Bacon, 18, competed in her first Olympics and placed fifth in the 200 backstroke.

Andrew Maguire, the school’s athletic director, called Ledecky and Bacon women who “have taken their humble and faith-based roots with them to this Olympic stage and it has proven to serve them well.”

“Stone Ridge is incredibly proud of these alumnae athletes, not only for what they accomplish in the sport of swimming, but for the values and character they represent,” head of school Catherine Ronan Karrells said in a statement to CNA.

Karrells noted that the school community has seen the two swimmers train and compete for years, “consistently inspired by their dedication to hitting their goals in the pool while also fully embracing the academic, community, and spiritual components of their education.”

Andrew Maguire, the school’s athletic director, called Ledecky and Bacon women who “have taken their humble and faith-based roots with them to this Olympic stage and it has proven to serve them well.”

He said that while students at Stone Ridge, “Katie and Phoebe both led by example with their passion for representing (the school) and their incredible competitive drive for achieving at a level far greater than their peers.”

Ledecky and Bacon will be “role models for future U.S. Swimmers,” said Maguire, and that he cannot wait to welcome the two back to campus in the future.

“I am so proud of them for setting their athletic goals as high as possible and putting in the work and commitment to achieve those goals – both swimmers deserve all of the accomplishments and accolades they achieve and both will always be Stone Ridge Gators,” Maguire said.

Accolades for Faith and Competitive Exceptionalism

Ledecky has long spoken about how her Catholic faith has kept her grounded, saying that she finds the Hail Mary to be a “calming” prayer and prays it before races.

The Catholic Standard reported that Ledecky and Bacon were paired as “buddies” at their Catholic elementary school, Little Flower School in Bethesda, Maryland. Their families both attend the parish, which sports a sign in front, praising its parishioners’ success in the pool.

Msgr. Peter Vaghi, who is the pastor of Church of the Little Flower, said that he was “so very proud of these two daughters of our parish and school,” and that the parish would be praying for them while they were in Tokyo.

Stone Ridge, meanwhile, held a pep rally for its pair of Olympians on July 23, and sold shirts cheering them on.

The Immaculate Heart of Mary Sisters, who formerly administered Little Flower School and reside in the parish’s convent, were “particularly fired up” after both women qualified for the Olympics.

Ledecky has long spoken about how her Catholic faith has kept her grounded, saying that she finds the Hail Mary to be a “calming” prayer and prays it before races.

In 2016, she told the National Catholic Register that she appreciates the “consistency” of Catholicism and has a particular devotion to Mary.

“I’ve counted on my faith to give me strength through both training and competition — but also in school, with my family and everyday life,” she said in 2016.

“So while my goals in the pool have changed, my faith remains something that’s consistent and something I can always rely on,” said Ledecky.