— a review of Ron Rapoport’s “Let’s Play Two: The Legend of Mr. Cub, the Life of Ernie Banks” —


I grew up in the northern suburbs of Chicago, so I carried the tag “North Sider” when it came to baseball. And this meant being a Cubs fan in a city divided by the Cubs on the Northside and the White Sox on the Southside.

That, however, was not the case for me. I am one of those rare birds that loved both the Cubs and the Sox. We had one TV channel, WGN, channel 9, that carried the games for both teams and one announcer, Jack Brickhouse, who did the broadcasts.

Ernie Banks, nicknamed “Mr. Cub” and “Mr. Sunshine,” was the Cub’s franchise star during this time (1953-1971) and was popular with all the Chicago baseball fans, even those who were true blue “North Siders.” His big smile and “let’s play two” were legendary. He was inducted into the National Baseball Hall of Fame in 1977 and was named to the Major League Baseball All-Century Team in 1999.

I loved this book and those who grew up with the Cubs will love it as well. Author Ron Rapoport weaves not only the story of Bank’s life, but also the history of baseball, the rise and fall of the “negro leagues,” and some valuable history of Chicago and chewing gum magnate, Philip Wrigley, the Cub’s long time owner.

Rapoport’s biography begins with Banks’ early life in Texas (the oldest in a family of 12), then the arc of the story continues with his apprenticeship in baseball (he did not play baseball until he was well into his teens), his life as “Mr. Cub” (trusting and vulnerable) , his well-guarded and unfortunate personal life (3 wives, and 4 estranged children), the pennant years of the late 60s, Leo Durocher’s abuse, and his later years. 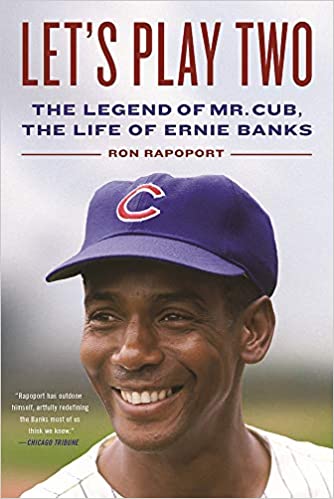 Banks was one who never complained about the poverty and segregation in which he was raised.

He was a dutiful son who gave up playing football rather than argue with his mother, and a teenager whose friends called him “Casper the Ghost” because of his ability to melt away at the first sign of trouble.

He was the batter who never questioned, or even looked back at, an umpire after a questionable call.

Banks was father who said, “I’m gone,” got in his car and drove away at the first sign of family discord.
A black man who refused to engage in the great public struggle over race during the time of his greatest celebrity.

The player who never once complained about wasting his finest seasons with a team that had no hope of winning a pennant.

The All Star whose family had a contentious public dispute over a will that was changed three months before he died at age 83. “A designing woman (his last wife) who had taken advantage of an old man suffering from dementia.

Banks is regarded as one of the greatest players of all time…and as a great human being.

William Marovitz, former Democratic state representative and state senator for Illinois, and lead producer of the musical “Miracle,” based on the Cubs’ 2016 World Series-winning season, said this about Banks…”It was impossible not to like Ernie. He always had a smile on his face. He never said anything negative about anybody. He made us feel good about the Cubs and Chicago and ourselves. How could you not love a guy like that?”

There is plenty to satisfy anyone with a serious interest in baseball, the Cubs, Chicago, the history of baseball and of course, Mr. Cub.

Thomas M. Loarie is the CEO of BryoLogyx, a rotating host of THE MENTORS RADIO PROGRAM, and a senior editorial advisor and columnist for Catholic Business Journal. He may be reached at [email protected]