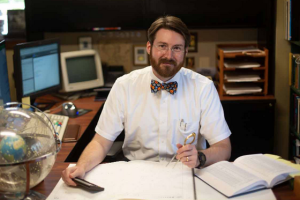 Dr. Christopher Shingledecker, assistant professor of Physics and Astronomy at Benedictine College, is part of a group of scientists announcing the discovery of numerous new molecules in interstellar space. Using observational data taken with the Green Bank Telescope (GBT) in West Virginia as part of the GOTHAM (GBT Observations of TMC-1: Hunting Aromatic Molecules) project, the team has discovered a vast, previously unknown reservoir of new aromatic material in the Taurus Molecular Cloud, or TMC-1, in deep space. Observations of TMC-1 made by the GOTHAM team have thus far revealed more than a dozen unexpected molecules.

“This discovery provides the first important clue as to how and where these molecules formed,” said Shingledecker. “It’s a major breakthrough in part because while we’ve been pretty confident that aromatic molecules are floating around in space, we haven’t until now been able to identify any.” 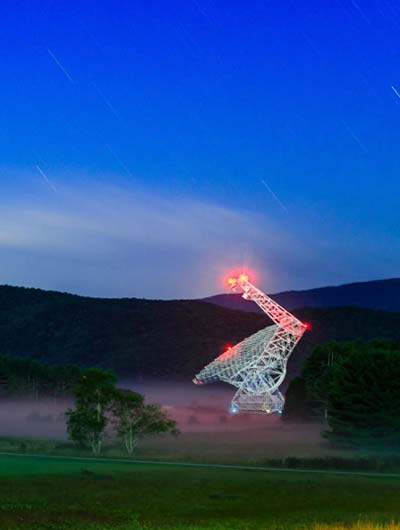 The enormous Green Bank Telescope, with a 100-meter diameter collecting area, is the world’s premiere single-dish radio astronomy telescope. The use of radio astronomy, which enables the detection of individual molecules instead of an indistinguishable mass, along with a stacking and matched filter analysis the group developed, allowed the scientists to detect the elusive signals. They identified two specific polycyclic aromatic hydrocarbons (PAHs) in space: the first specific molecules ever detected, even though PAHs are thought to be prevalent in the interstellar medium.

“We had always thought polycyclic aromatic hydrocarbons were primarily formed in the atmospheres of dying stars,” said Brett McGuire, Assistant Professor of Chemistry at the Massachusetts Institute of Technology, and the Project Principal Investigator for GOTHAM, in an article in SciTechDaily, “In this study, we found them in cold, dark clouds where stars haven’t even started forming yet.”

The study has been published in the journal, Science, and many other publications around the world.

During this project, Shingledecker and Benedictine College teamed with scientists from the Harvard & Smithsonian Center for Astrophysics, Massachusetts Institute of Technology, National Radio Astronomy Observatory, National Aeronautics and Space Administration Goddard Flight Center, University of Virginia, and the Lebedev Physical Institute of the Russian Academy of Sciences.