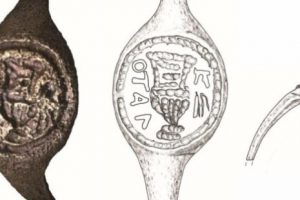 Aletia & Haaretz—Archaeologists have determined that a ring found 50 years ago near the West Bank’s Bethlehem belonged to the Roman governor Pontius Pilate, according to an article in Haaretz.

The ring, reports Haaretz, was found during an excavation in the late sixties along with thousands over other artifacts, but was only recently throughly cleaned and examined, revealing an inscription which identified it as belonging to the man who ordered Jesus’ crucifixion.

The stamping ring of the sort that was used for affixing an official seal includes a picture of a wine vessel and the Greek writing which was translated as saying “Pilatus.”

Pontius Pilate was the fifth prefect of the Roman province of Judaea, where he served under Emperor Tiberius from about 26 to 37 AD. In Gospel accounts, he is reluctant to condemn Jesus to death, but eventually bows down to the wishes of an angry crowd and orders his crucifixion.

Archaeologists believe the ring either belonged to Pilate himself or to one of his aides who would have had the authority to use his ..Read more>>