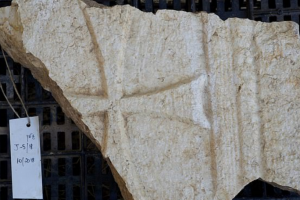 Church of the Apostles FOUND: in Israel Archaeological Dig near Galilee

Archaeologists in Israel’s Galilee have discovered the remains of an ancient structure now said to be the Church of the Apostles – a long-debated biblical site built atop the homes of the apostles Peter and Andrew.

While mentions of the church can be found in Christian text dating as far back as the year 725 AD, there has been no confirmation of its existence, leading some to doubt that it was ever real.

Now, a team from Kinneret College in Israel and Nyack College’s Center for the Study of Ancient Judaism and Christian Origins has found what could be the first physical evidence at the site of el-Araj, in Beit Habek near the northern shore of the Sea of Galilee.

Excavations this summer have turned up ornate mosaic floors, gilded remnants of a wall mosaic, and the fragments of a marble chancel screen that was once adorned with a… Read more>>