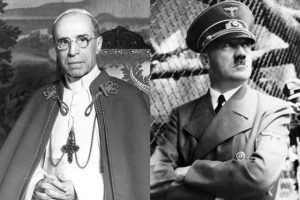 Pope Francis announced Monday that the Vatican will open its archives on the pontificate of Pope Pius XII. Confidential files of the pope who led the Church during World War II will be made available next year.

“Serious and objective historical research” will be able to evaluate Pius XII’s “hidden but active diplomacy” “in its proper light,” Pope Francis said March 4. The pope said that the full confidential files, called a “secret archive,” will be released March 2, 2020.

The pontificate of Pius XII has been often misunderstood. Critics have accused him of indifference to the plight of the Jewish people during the Second World War, despite several already public documents which show the pope’s systematic efforts to assist Jews in Italy.

In the late 1990s, debate over whether Pius XII did enough to counter the Nazis reached a high point with the publication of the deeply controversial book, “Hitler’s Pope,” by British journalist John Cornwell. The book was highly critical of Pius XII, charging that he was culpably silent – if not an accomplice – in the rise of Nazism.

A book published in 2015 documented how Pope Pius XII chose to resist Adolf Hitler with covert action in lieu of overt protest. Historian Mark Riebling, author of Church of Spies: The Pope’s Secret War Against Hitler, drew on wartime documents and interviews with American intelligence agents to tell how Pope Pius XII secretly provided support for three attempts to overthrow Hitler.

“The Church is not afraid of history, rather, loves it and would like to love it more and better, as God loves it!” Pope Francis said in a meeting with Vatican secret archives personnel in which he made the announcement.

The Vatican archives for the entirety of Pius XII’s pontificate March 1939 – Oct. 1958 will open on March 2, 2020. The complete catalog is expected to include approximately 16 million documents.

Pius XII “found himself leading the Barque of Peter at one of the saddest and darkest moments of the twentieth century,” Pope Francis said.

He faced “moments of serious difficulties, of tormented decisions, of human and Christian prudence, which some might have seemed reticent,” he explained. For this, some have criticized Pius with “some prejudice or exaggeration,” Francis added.

Pope Francis has previously considered Pope Pius XII’ cause for sainthood, according to a source in the Vatican’s Congregation for Causes of Saints.

Benedict XVI declared Pius XII Venerable on Dec. 19, 2009, based on the recommendation of the committee investigating his cause.

When Pope Paul VI started the beatification and canonization process in 1967, nine years after Pius XII’s death, he formed a committee of historians to conduct an in-depth study of his predecessor’s life and behavior, giving particular attention to the events of World War II.

Their work led to the publication of “Actes et Documents du Saint Siège relatifs à la Seconde Guerre Mondiale” (Acts and Documents of the Holy See related to the Second World War), an 11-volume collection of documents from the Vatican’s Secret Archive about Pius XII’s papacy during that tumultuous time. The remainder of the documents from Pius XII’s papacy have remained unpublished.

“Knowing what I do about Pius XII, and having researched him for many years, I believe he wanted to be a saint. He wanted people in Germany to be saints,” Riebling previously told CNA.

“When he heard that a priest was arrested for praying for the Jews and sent off to a concentration camp, he said: ‘I wish everyone would do that’ … But he didn’t say it publicly,” the writer acknowledged.