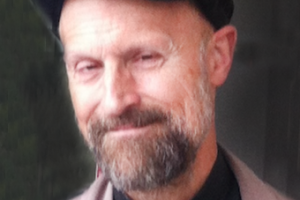 (originally posted Oct 13, 2015)—Well, as my T-shirt proclaims, “Pope Francis in America…. I WAS THERE.”  I was specifically there for the canonization of Fr. Serra, an old family friend so to speak.  Serra and I go way back–I knew him even before he was venerable.  One of the happy sources of this connection was my mom, who told me stories about Serra since the time I was a young child.

I was even received into the Catholic Church right over Fr. Serra’s gravesite in Carmel.  Later, I prayed to Fr. Serra, a patron of vocations, for help with my vocation. I figured he had us surrounded here at New Camaldoli—the monastery in Big Sur, CA, where I made my final profession and now live—since we have a Fr. Serra-founded mission to the north, to the east, and to the south.

Someone asked one of my sisters, “How did Fr. Isaiah manage to become a con-celebrant at the Papal Mass?”   She replied, “By knocking on every door he could think of.”  That was really true, too! I talked to our local Bishop. I talked to the head of the Franciscans in California, I wrote to well–connected priests.  I called up the Basilica in D.C. where the Canonization Mass was to take place. I called on a multitude of prayerful friends.  Eventually, I was directed to an on-line sign up. Once I did that, all that was required was a formal “letter of suitability” from my superior.  That done, away I went.

I stayed with the Benedictines at St. Anselm’s, perfect for walking purposes since the monastery is only about a mile away from the site of the canonization, the national shrine. (No one would dream of driving to the shrine on the day of the Pope’s visit.)

The weather was perfect and one man even greeted me on my way to the Basilica, “Have a blest day.” Seemed it couldn’t be otherwise.

The security was airport–tight, with a strong no-nonsense attitude.  Once inside the shrine, though, a kind of festive atmosphere prevailed; as though the Pope had gotten into the wine. Everyone was a bit giddy.  The only bad thing was that now we had to wait for three additional three hours—in the hot sun—before the Mass would start.  I foolishly didn’t bring a water bottle, but was exceedingly grateful that the priest next to me generously shared his water, so I was able to bear that desert time.  We’d all been issued ponchos in the event of rain, but what we really needed was parasols!

We concelebrants were told we couldn’t process in, but we were given great seats. I was barely more than 100 feet from the main altar, slightly to the right and in front of the Pope. (I can say now that I was for a time the Pope’s right-hand man.)

We could tell the Mass was about to begin when the crowd began to erupt into wild cheers as the Pope approached.

First, the bishops came in solemn procession—I believe all the U.S. bishops were present, numbering some 400. Then the Pope himself. The choir was singing the most rollicking and rocking of Spanish hymns. You almost had to tap your feet. To my ears, it sounded like a tango, and I thought to myself, “well yes, the Pope is coming to tango with us.”  (He does like a good tango they say.)

I half-expected the Pope to spend a little time schmoozing with the crowd, telling us how great it was to be in Washington, etc.  But there was none of that. He dove right into the Mass proper, in what I’d describe as a reverent but business-like manner.  He looked drawn and tired at this point in the day, but he entered gracefully into the liturgy ritual.

After the boisterous tango, we almost immediately plunged into a solemn Gregorian chant invocation of the saints, all in Latin. I felt especially moved when the American glories were invoked …Sancta Catharina Drexel, ora pro nobis; Sancta Elisbeth Anna Seton, ora pro nobis;  Sancte Damiane de Veuster, and on and wonderfully on.

Next came the canonization itself, which was formally pronounced but with no special fanfare, although a “Viva Junipero!” erupted from at least one California monk…guess who?!

When the Minister General of the Franciscans wrote Pope Francis in 2014, he presented Serra as, “a religious man exemplary for his spirit of humility, penitence, boundless generosity toward the poor, strong during suffering, loyal to the teaching of the Church, an ardent missionary, zealous preacher, courageous proponent of the Christian faith, tireless evangelizer and true apostle of the Indios.”  I’d call that a strong letter of recommendation.

“Much to be envied are those who give their lives to a cause greater than themselves, in loving service to others,” Saint John Paul II had said at the time. “This, more than words or deeds alone, is what draws people to Christ.”  Much to be envied!

The relics of Fr. Serra were then presented, carried with great dignity by a Chochenyo Native American. He wore an ordinary suit with a striking shawl of eagle feathers placed over it. This man enthroned the relics, moving just so. The whole Mass seemed to me a well-choreographed ballet, in which everyone knew their steps and precisely where they were meant to proceed. I was almost in tears, remembering a line from the Bible, quoted to such effect in the movie Chariots of Fire: “He who honors me I will honor.”

The readings were so fitting for the new saint. The first being “how beautiful on the mountains are the feet of him who brings good news” from Isaiah. The second reading was from Philippians: “Rejoice in the Lord always.” The Gospel was Matthew 28: “Go out to all the world and make disciples of all nations.”

I believe the Pope sees in Serra a kindred spirit.

————————————————
Fr. Isaiah Teichert, OSB, is a New Camaldolese monk of the Immaculate Heart Monastery in Big Sur, Calif., and the Chaplain for Catholic Business Journal. For more information about this monastery, go to: www.contemplation.com