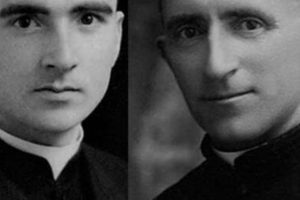 Vatican News/CNA—Two Catholic priests killed by Nazis while ministering to the dying amid the Boves massacre were beatified as martyrs on Sunday in northern Italy.

See two very short videos at the end of this article featuring actual footage of these inspiring priests.

In the face of grave danger, Father Giuseppe Bernardi and Father Mario Ghibaudo “did not abandon the flock entrusted to them, but remained close with God’s blessing and comfort to the point of shedding their blood,” stated the papal decree read at their beatification Mass on Oct. 16. (see slides below)

Pope Francis lauded the two priests in his Angelus address and prayed that their example may “enkindle in priests the desire to be pastors after Christ’s heart, always alongside their people.”

Twenty-year-old Father Ghibaudo went to confession and offered Mass in Boves, Italy, on the morning of Sept. 19, 1943. Hours later, he found himself rushing to help orphans escape to the countryside as German soldiers burned down 350 buildings in the Italian mountain town south of Turin. 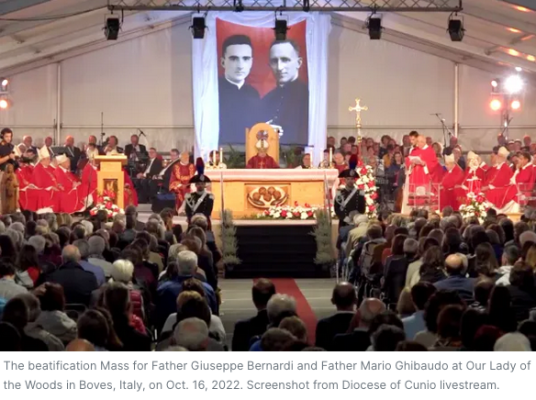 The young priest returned to the town to preserve the consecrated sacred Hosts, offering absolution to people he encountered. As he approached a man who had been shot in the back of the head to give him absolution “in articulo mortis,” the priest himself was shot with a machine gun. A soldier further stamped on the priest’s face with his boots and stabbed him, killing him only three months after his ordination to the priesthood.

Ghibaudo died while ministering as a priest, fulfilling the call he felt when he received his First Communion and later wrote about when he was a high school student: “Becoming a priest, living as a priest, dying as a priest: this is the synthesis of the dearest hopes I conceive for my life.”

After Italy surrendered to the Allies in September 1943, two German soldiers were captured as armed clashes broke out in the mountains of Boves between Nazi soldiers and a group of Italian partisans. German Major Joseph Peiper threatened the destruction of Boves if the two soldiers were not released.

As a parish priest in Boves, Father Bernardi was called upon to serve as a mediator together with Antonio Vassallo, a local businessman. After the two successfully negotiated the release of the two German soldiers unharmed, the Nazis broke the pact and began a campaign of retaliatory violence. The priest and his fellow mediator were detained in an armored car from which they watched their community be destroyed. According to the Vatican decree on his martyrdom, Bernardi blessed the corpses of the dead from the armored vehicle. He was killed by a gunshot and then set on fire on Sept. 19, 1943. He was 45 years old.

Bernardi had preached on martyrdom as his parish celebrated the feast of St. Bartholomew: “He will die, if necessary, in the midst of excruciating torments, to proclaim to everyone from the gallows that his faith, his love for God is stronger than death.”

More than 1,000 people attended the beatification Mass offered on the grounds of the Sanctuary of Our Lady of the Woods in Boves, according to local media.

The crowd venerated relics of the remains of the two new blessed, carried in procession down the aisle and placed near the altar.

Cardinal Marcello Semeraro, prefect of the Vatican Dicastery for the Causes of Saints, presided over the Mass.

In his homily, Semeraro said that the parish priest and parochial vicar died while offering intercessory prayers for others.

The cardinal read aloud some of the testimonies that the Vatican received where a witness described Ghibaudo as a “priest who carried out his ministry … helping to escape and in the meantime absolved and blessed” and Bernardi as a “good shepherd who gave his life for the sheep.”

The Martyrs of Boves — Very short, in Italian, it paints a real-life visual picture of these matryrs (even if you don’t understand Italian):

Seeds of Hope – another VERY SHORT mini-documentary, in Italian, that really gives you a sense of these martyrs, even if you don’t understand Italian):