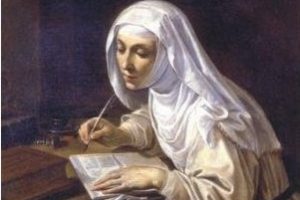 SAINTS AT WORK: St. Catherine of Siena, Dominican Model of Fortitude during Pandemic

By Dominican Sisters of Mary, Mother of the Eucharist

St. Catherine of Siena was born March 25th, 1347, when the world stood at the brink of the very pandemic for which the word “quarantine” was invented. In Italian, “quaranta giorni” – forty days – was the allotted time that ships were required to remain offshore before landing. The Bubonic Plague, also known as the Black Death, claimed a total of 75-200 million lives. Catherine’s birthplace – Siena, Italy –then a metropolitan Tuscan town, lost 30-60% of its population. In addition to altering the social and political landscape long-term, the plague resulted in much financial hardship for small business owners like Catherine’s family, who ran a dye shop and owned a small vineyard.

Recurring outbursts of the Bubonic Plague decimated European countries, most especially in the summer of 1374, when Catherine was 27 years old and already known for her ascetism, visions, and tireless care for the poor and infirmed. She witnessed many people dying all around her with no one to care for them or bury the dead. Members of her family also died–a sister, two brothers, and e

ight of her nieces and nephews. Catherine herself buried them with hope in their resurrection, comforting herself and others by saying “I shall never lose them again!” These words were a testimony to her profound understanding and trust in Christ’s love, the meaning of suffering, and the joy that awaits us in heaven.

With her companions, Catherine went through the city and its hospitals to care for those suffering from the plague and bury the overwhelming numbers who died.  Today, in Ospitale Santa Maria della Scala, one of Europe’s first hospitals, one can find a small, cell-like niche where Catherine was known to sneak just a few moments of sleep amid endless hours of giving bodily comfort to pandemic victims. Now, it is a small, hidden shrine in honor of her great fortitude and zeal for the salvation of souls.

Many were healed through Catherine’s prayers during the pandemic. Messer Matteo di Cenni was the rector of another hospital in Siena and was much beloved by Catherine. When she heard that he was dying of the plague, she went to him and proclaimed: “Rise up at once, Messer Matteo! This is not the time to be lying in bed.” He was healed immediately, and went back to his work of caring for the sick.

In these days fraught with fear, isolation, exhaustion, sickness, death, and loss, we find good reason to turn to St. Catherine for help and hope. From healthcare workers sacrificing their sleep, families, and comfort to help just one more patient, to those suffering illness and the loss of loved ones, jobs and businesses, Catherine is a powerful intercessor for our times.

St. Catherine of Siena, pray for me! Pray for us!

In 1997, John Cardinal O’Connor of New York canonically established the Dominican Sisters of Mary, Mother of the Eucharist as a community of religious women. Their apostolate follows upon preaching and teaching the Truth in order to gain souls for the Kingdom of Christ. To learn more about the order, go to: https://www.sistersofmary.org/