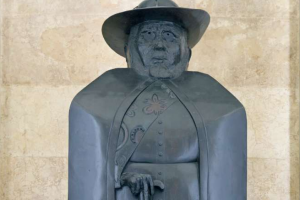 CNA—A Hawaiian Catholic catechist said that St. Damien of Molokai is a “hero” to the Hawaiian people, after an outspoken congresswoman, Alexandria Ocasio-Cortez (D-NY), claimed the statue honoring him in the U.S. Capitol is part of colonialism and “patriarchy and white supremacist culture.”

St. Damien “gave his life” serving the isolated leper colony at Kalaupapa peninsula on the Hawaiian island of Molokai, said Dallas Carter, a native Hawaiian and a catechist for the diocese of Honolulu, in an interview with CNA.

“Any Hawaiian here who is aware of their history–which most Hawaiians are–would absolutely, Catholic or not, defend the legacy of Damien as a man who was embraced by the people, and who is a hero to us because of his love for the Hawaiian people,” Carter said.

“We did not judge him by the color of his skin. We judged him by the love that he had for our people,” Carter told CNA.

“Even when we select figures to tell the stories of colonized places, it is the colonizers and settlers whose stories are told – and virtually no one else,” Ocasio-Cortez posted, with a picture of Fr. Damien’s U.S. Capitol statue in the background.

In 1969, Hawaii chose to honor St. Damien alongside Kamehameha I in the National Statuary Hall Collection in the U.S. Capitol.

Ocasio-Cortez noted on Thursday that Hawaii’s statue was of Fr. Damien and not of “Queen Lili’uokalani of Hawaii, the only Queen Regnant of Hawaii,” implying that it was an example of “colonizers” being honored instead of historical figures who are native to states.

“This isn’t to litigate each and every individual statue,” she said, arguing that “patterns” among the “totality” of the statues in the Capitol reveal they honor “virtually all men, all white, and mostly both.”

Ocasio-Cortez’s office told CNA that “it’s the patterns that have emerged among all of the statues in the Capitol: virtually all white men. Each individual could be worthy, moral people. But the deliberate erasure of women and people of color from our history is a result of the influence of patriarchy and white supremacy.”

Her office later added that “Fr. Damien conducted acts of great good, and his is a story worth telling. It is still worthy for us to examine from a US history perspective why a non-Hawaiian, non-American was chosen as the statue to represent Hawaii in the Capitol over other Hawaiian natives who conducted great acts of good, and why so few women and people of color are represented in Capitol statues at all.”

St. Damien of Molokai was a religious priest of the Congregation of the Sacred Hearts of Jesus and Mary who spent the last 16 years of his life caring for lepers in the Hawaiian Kingdom.

He was born Jozef De Veuster in Belgium in 1840, and he entered the Picpus Fathers in 1859, taking the name Damien. He was sent to the mission in Hawaii in 1864, and was ordained a priest that May.

Shortly after that, the Hawaiian government and King Kamehameha V passed a law mandating that lepers quarantine themselves in an isolated colony on the island of Molokai. The local bishop asked for volunteers to minister to the leper colony, and Fr. Damien presented himself, beginning his work there in 1873.

Carter noted that the Hawaiian government of the time “did not know how to deal with leprosy,” and that “no one wanted to deal with Kalaupapa [colony].”

Damien himself was afraid to go and minister to the lepers, Carter said, but “over a period of time—his journal is very clear, and the writings of the Hawaiian people in that town are very clear—that he fell in love with the people.”

Eventually, Damien was given an ultimatum by his religious superior to either leave the colony or remain there permanently. He chose to stay.

The priest served the colony for the rest of his life, attending to both spiritual and temporal needs of the lepers. By 1884 he had contracted leprosy, and he continued to minister until his death in 1889.

St. Damien is beloved by native Hawaiians, Carter said, and then-princess Lili’uokalani—who Cortez implied should be given a statue instead of Damien—made Fr. Damien a Knight Commander of the Royal Order of Kalākaua in 1881, for his “efforts in alleviating the distresses and mitigating the sorrows of the unfortunate.”

Damien is also the only priest-saint in the Hawaiian martyrology “that spoke the native Hawaiian language,” Carter said. “He loved the Hawaiian people, he embraced our culture,” he said, and in turn “he was part of our kingdom. He was one of us.”

The priest was canonized Oct. 11, 2009 by Pope Benedict XVI, who said that “his missionary activity, which gave him such joy, reached its peak in charity.”

On the occasion of the canonization, U.S. president Barack Obama expressed his “deep admiration for the life of Blessed Damien De Veuster.”

“Fr. Damien has also earned a special place in the hearts of Hawaiians. I recall many stories from my youth about his tireless work there to care for those suffering from leprosy who had been cast out,” Obama, who was reportedly born on the Hawaiian island of Oahu, said.

“Following in the steps of Jesus’ ministry to the lepers, Fr. Damien challenged the stigmatizing effects of disease, giving voice to the voiceless and, ultimately, sacrificing his own life to bring dignity to so many.”