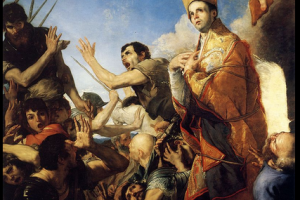 On Sept. 19, the Catholic Church celebrates the feast of St. Januarius, bishop, martyr, and patron saint of Naples, Italy. Traditionally, on this day and on two other occasions a year, his blood, which is kept in a glass ampoule in the shape of a rounded cruet, liquifies. According to documentation cited by the Italian media Famiglia Cristiana, the miracle has taken place since at least 1389, the first instance on record.

Here are the key facts:

1. The blood is kept in two glass ampoules.

The dried blood of St. Januarius, who died around 305 A.D., is preserved in two glass ampoules, one larger than the other, in the Chapel of the Treasury of the Naples Cathedral.

2. The liquefaction is a miracle

The Church believes that the miracle takes place in response to the dedication and prayers of the faithful. When the miracle occurs, the mass of reddish dried blood, adhering to one side of the ampoule, turns into completely liquid blood, covering the glass from side to side.

The saint’s blood traditionally liquefies three times a year: in commemoration of the transfer of his remains to Naples (the Saturday before the first Sunday in May); on his liturgical feast (Sept. 19), and on the anniversary of the eruption of nearby Mount Vesuvius in 1631 when his intercession was invoked and the city was spared from the effects of the eruption (Dec. 16).

4. The liquefaction can take days.

The liquefaction process sometimes takes hours or even days, but sometimes it doesn’t happen at all. Normally, after a period that can range from two minutes to an hour, the solid mass turns red and begins to bubble.

The ampoules, which contain a dark solid mass, are enclosed in a reliquary that is held up and rotated sideways by a priest to show the blood has liquified. This is usually done by the Archbishop of Naples while the people pray.

According to the Italian Catholic magazine Famiglia Cristiana, the reliquary with the ampoules remains on view for the faithful for eight days, during which they can kiss it while a priest turns it to show that the blood is still liquid. Then it is returned to the safety vault and locked away inside the Chapel of the Treasury of the Cathedral.

5. The faithful venerate the relic every year.

With the exclamation: “The miracle has happened!” the people approach the priest holding the reliquary to kiss the relic and sing the “Te Deum” in thanksgiving.

6. There is no scientific explanation.

Several investigations have already been conducted in the past to find a scientific explanation that answers the question of how something solid can suddenly liquefy, but none has been satisfactory so far.

7. The liquefaction does not always occur.

When the blood doesn’t liquefy, the Neapolitans take it as an omen of misfortune.

The relic also remained solid the year Naples elected a communist mayor, but it spontaneously liquefied when the late Archbishop of New York, Cardinal Terence Cooke, visited the St. Januarius shrine in 1978.

8. The blood has liquefied in the presence of some popes.

In 2015, while Pope Francis was giving some advice to the religious, priests, and seminarians of Naples, the blood liquefied again.

The last time the liquefaction occurred before a pontiff was in 1848 with Pius IX. It did not happen when John Paul II visited the city in October 1979 or in the presence of Benedict XVI in October 2007.