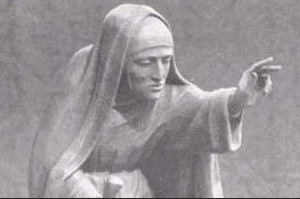 The Holy See press office said April 24 that the pope had authorized the extension of the liturgical cult of Blessed Margaret of Castello to the universal Church during a Saturday morning meeting with Cardinal Marcello Semeraro, prefect of the Vatican Congregation for the Causes of Saints.

She will now be inscribed among the saints via the procedure also called “equivalent” canonization, where the requirement for a miracle attributed to the candidate’s intercession is waived.

Margaret of Castello was born blind and with a severe curvature of the spine in 1287 in Metola, present-day central Italy. Her parents abandoned her in 1303 at a shrine in Città di Castello where they had taken her in hope of a miraculous cure. She was discovered by local townsfolk, who began caring for her.

She came in contact with the then recently founded Dominican order and was admitted to the Third Order of St. Dominic. While remaining a laywoman, she received a religious habit, which she wore for the rest of her life.

To thank her neighbors for raising her, she opened a small school, where she taught children the Psalms, which she had learned by heart, and instructed them in the Catholic faith.

She died in 1320, at the age of 33, and was buried inside the church, where her tomb quickly became associated with miracles.

Pope Paul V declared her Blessed by equivalent beatification in 1609.

While there were few equipollent canonizations in the 20th century, Benedict XVI declared Hildegard of Bingen a saint via the procedure in 2012.

Pope Francis has used the process relatively frequently. Saints made by equivalent canonization since his election include Angela of Foligno and Peter Faber in 2013, José de Anchieta, Marie of the Incarnation, and François de Laval de Montmorency in 2014, and Bartholomew of Braga in 2019.

During Saturday’s meeting with Semeraro, the pope also authorized the Congregation for the Causes of the Saints to promulgate a decree recognizing the heroic virtues of the Argentine millionaire Enrique Shaw.

Shaw was born in Paris, France, in 1921, and emigrated to Argentina, where he established himself as a businessman of outstanding integrity. He founded the Christian Association of Business Executives in 1952 and sought to apply Catholic social teaching in the workplace. He died in Buenos Aires, Argentina, in 1962.