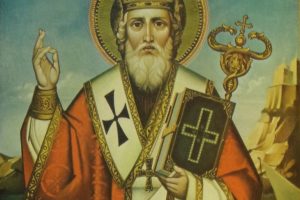 In reflecting on this season of the year, I have often wondered how a Martian reporter would do a story on Christmas in the United States. If one only had the dominant cultural icons of TV, movies, news media and retail stores, my guess is that the Martian viewing audience wouldn’t have a clue as to what Christmas was about.

They might think it had something to do with snowmen or reindeer or retail store sales. And if any particular person rose to the top in the public’s conscious awareness, it would be a jolly secular guy at risk for stroke or cardiac arrest who liked to dress in red and let his beard grow. Rather than just bemoan this fact, I assert that we need to remythologize Santa Claus.

Most people simply do not realize the rich ancient heritage behind the Santa Claus story. The secularized and sanitized contemporary version pales in comparison with the deeply Christian ethos and content of the original.

The origin of the St. Nicholas tradition goes back to Bishop Nicholas of Myra in Lycia (Turkey). Little solid historical information is known about Nicholas except that he was Bishop of Myra and died around A.D. 350.

Much exaggerated legendary material is connected with his life and ministry, but if nothing else, the legends tell us what values and beliefs the church held as important as they were projected onto Nicholas. To the bare minimum of facts, legend has supplied intriguing details through such writers as St. Methodius (patriarch of Constantinople in the 850s) and the Greek writer Metaphrastes in the 10th century.

The story goes that Nicholas was born in A.D. 280 of pious and wealthy parents who raised him in the fear and admonition of the Lord and taught him “sacred books” from the age of 5. He was forced to grow up quickly upon the sudden death of his parents.

Inheriting his family’s wealth, he was left rich and lonely, but he had the desire to use his wealth for good. The first opportunity to do this happened when he heard about a father who, through an unfortunate turn of fortune, was left destitute with three daughters. Without marriage dowry money, the daughters would be condemned to a life of singleness and prostitution, so Nicholas threw some small bags of gold coins into the window of the home (some traditions say down the chimney), thereby saving the children from a life of misery.

Later as a teenager, Nicholas made a pilgrimage to Egypt and Palestine. Upon returning home he felt called to ministry and was subsequently ordained. He spent time at the Monastery of Holy Zion near Myra until an old priest had a vision that he was to be the new bishop.

The congregation overwhelmingly elected him bishop, and he became known for his holiness, passion for the gospel and zeal. He challenged the old gods and paganism at the principal temple in his district (to the god Artemis), and it was said that the evil spirits “fled howling before him.”

But the old deities did not go easily. In A.D. 303, Emperor Diocletian directed the persecution of Christians, and “as he [Nicholas] was the chief priest of the Christians of this town and preached the truths of faith with a holy liberty, Nicholas was seized by the magistrates, tortured, then chained and thrown into prison with many other Christians.”

With the Edict of Milan, Emperor Constantine ordered the cessation of all persecution of the church, and the Christians were released from prisons. Those who survived Diocletian’s purges were… Read More>>  (editors at Catholic Business Journal highly recommend reading the full article!)