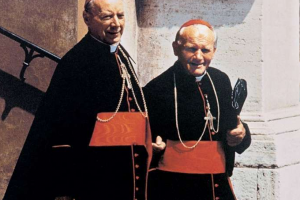 CNA—The beatification of Cardinal Stefan Wyszyński, the former Primate of Poland who heroically resisted Communism, has been postponed because of the coronavirus.

Cardinal Kazimierz Nycz said April 28 that the beatification would no longer take place as planned in Warsaw’s Piłsudski Square on June 7.

“A pandemic threatening the health and life of people makes it impossible to prepare and carry out this ceremony,” the archbishop of Warsaw said. “The first priority must be concern for human safety.”

Primate of the Millennium

A new date will be announced when the pandemic is over, the cardinal said, adding that the Holy See supported the decision.

Wyszyński is credited with helping to preserve and strengthen Christianity in Poland during the Communist regime’s persecution 1945-1989.

He is known as the “Primate of the Millennium” because as Primate of Poland he oversaw a nine-year program of preparation culminating in a nationwide celebration of the millennium of Poland’s baptism in 1966.

Given that Wyszyński is admired across the world, “we must make it possible for a wide range of faithful, including Poles and guests from abroad, to participate in the beatification ceremonies,” Cardinal Nycz explained.

“For this reason, after the pandemic is over, we will organize the beatification ceremony in Warsaw in a dignified and elevated way, and at the same time modest and taking into account the expected effects of the pandemic.”

Cardinal Nycz clarified that the committee overseeing the beatification had been suspended, rather than dissolved. The Church would continue to work with local and national authorities in preparation for the event, he said.

The Vatican announced the approval of a miracle attributed to Wyszyński’s intercession last October.

The miracle involved the healing of a 19-year-old woman from thyroid cancer in 1989. After the young woman received the incurable diagnosis, a group of Polish nuns began praying for her healing through the intercession of Wyszyński, who died of abdominal cancer in 1981.

In 1953, Wyszyński was placed under house arrest by Communist authorities for three years for refusing to punish priests active in the Polish resistance against the Communist regime.

He helped to secure the approval of Karol Wojtyła as archbishop of Kraków in 1964, which ultimately led to Wojtyła’s election as Pope John Paul II in 1978.

Wyszyński died May 28, 1981, 15 days after Pope John Paul II was shot in an assassination attempt in 1981. Unable to attend the cardinal’s funeral, John Paul II wrote in a letter to the people of Poland, “Meditate particularly on the figure of the unforgettable primate, Cardinal Stefan Wyszyński of venerated memory, his person, his teaching, his role in such a difficult period of our history.”