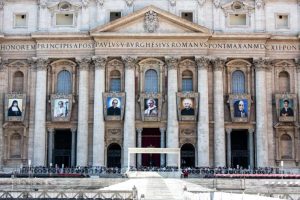 CNA—Below are brief biographies on the lives of each of the seven new saints canonized by Pope Francis Sunday, as well as photos of each saint’s banner currently on display at the Vatican.

Born Giovanni Battista Montini in 1897 and ordained a priest in 1920, he did graduate studies in literature, philosophy, and canon law in Rome before beginning to work for the Vatican Secretariat of State. In 1954, he was named Archbishop of Milan, and in 1958 was made a Cardinal by Pope John XXIII. As a Cardinal, he helped to arrange the Second Vatican Council and chose to continue the council after he became Pope.

Montini was elected as Pope Paul VI in 1963 at age 65, not long after the start of the second Vatican Council. This was a difficult time for the Church and for the world, as the “Sexual Revolution” was in full swing and the struggle for civil rights in the United States in particular was at its peak. Paul VI is perhaps most noted for his 1968 encyclical Humanae Vitae, which served as the Church’s official rebuke to artificial contraception, prohibiting its use.

Born in 1917 in El Salvador, Romero was auxiliary bishop of San Salvador for four years before being elevated to Archbishop in 1977. He was an outspoken defender of the rights of the poor in El Salvador, who were being terrorized by right-wing military death squads mainly because of protests over the extreme economic inequality in the country in the 20th century.

His weekly homilies, broadcast across the country on radio, were a galvanizing force for the country’s poor as well as a reliable source of news. In addition to speaking out against the government’s actions El Salvador, he also criticized the US government for backing the military junta that seized El Salvador in 1979, and even wrote to Jimmy Carter in February 1980 asking him to stop supporting the repressive regime.

In March 1980, Romero was assassinated, likely by a right-wing death squad, while celebrating Mass.

Born in 1751 and ordained a priest in 1775, Romano had studied the writings of St. Alphonsus de Liguori and developed a devotion to the Blessed Sacrament. He spent his whole life as a priest in Torre del Greco and was known for his simple ways and his care for orphans. He worked to rebuild his parish, often with his bare hands, after the eruption of Mount Vesuvius in 1794. He died in December 1831 of pneumonia and was beatified by Paul VI in 1963.

Born in Milan in 1853, Spinelli entered the seminary and was ordained a priest in 1875. He began his apostolate educating the poor and also served as a seminary professor, spiritual director, and counselor for several women’s religious communities. In 1882, Fr. Spinelli met Caterina Comensoli, with whom he would found the Institute of the Adorers of the Blessed Sacrament. The sisters dedicated themselves to Eucharistic adoration day and night, which inspired their service to the poor and suffering.

He died in 1913. Today his institute has around 250 communities in Italy, Congo, Senegal, Cameroon, Colombia, and Argentina. Their ministries include caring for people with HIV, orphans, drug addicts, and prisoners.

Born in Pescosansonesco, Italy in 1817, Sulprizio lost both of his parents at age six and was brought up by an uncle who exploited him for hard labor. Fatigued and often given dangerous assignments, he developed gangrene and eventually lost his leg. Despite his tremendous suffering, he would reportedly make statements such as: “Jesus suffered a lot for me. Why should I not suffer for Him? I would die in order to convert even one sinner.”

He recovered from the gangrene and dedicated himself to helping other patients before his health deteriorated again. Sulprizio died of bone cancer in 1836, when he was only 19 years old.

Born in 1889 in Madrid, Spain, Nazaria was the fourth of 18 children. Growing up, her family was indifferent and sometimes even hostile to her desire to enter religious life, but later she led several family members back to the Church when she entered the Franciscan Third Order. Her family moved to Mexico in 1904, and Nazarie met sisters of the Institute of Sisters of the Abandoned Elders, who inspired her to join their order. In 1915, she chose to take perpetual vows with the order in Mexico City and was assigned to a hospice in Oruro, Bolivia for 12 years.

Beginning in 1920, she felt a call to found a new order dedicated to missionary work. In June 1925, she founded the Pontifical Crusade, later renamed the Congregation of the Missionary Crusaders of the Church, with the mission to catechize children and adults, support the work of priests, conduct missions, and to print and distribute short religious tracts. Many opposed her work, but Nazaria pressed on. Her order cared for soldiers on both sides of the 1932-35 war between Paraguay and Bolivia, and she herself survived persecutions in Spain during the Spanish Civil war. She died in July 1943, and four years later Pope Pius XII finally granted papal approval to the Congregation of the Missionary Crusaders of the Church, which by that time had spread throughout South America and begun work in Portugal, Spain, France, Italy and Cameroon.

Born in Dembach, Germany in 1820 as Catherine Kasper, she attended very little school because of poor health. Despite this, she began to help the poor, the abandoned, and the sick at a young age. Her mother taught her household chores, as well as how to spin and weave fabric. After her father died when she was 21, Catherine worked the land as a farm hand for about 10 cents a day. Her helpfulness toward others attracted other women to her, and she felt a call to the religious life, but knew she needed to stay and support her mother, who was in poor health.

After her mother died, Catherine started, with the approval of the bishop of Limburg, Germany, a small house with several friends who also felt the call. In 1851 she and four other women officially took vows of poverty, chastity, and obedience and formed the Poor Handmaids of Jesus Christ. Catherine, known in the religious community as Mother Mary, served five consecutive terms as superior of the house and continued to work with novices and to open houses for their order all over the world. Today there are 690 sisters in 104 houses in Germany, the Netherlands, the United States, Mexico and India.