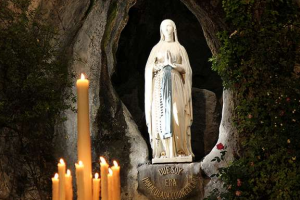 CNA — Another miracle was officially recognized at the Marian shrine of Our Lady of Lourdes in France, the 70th Lourdes miracle recognized by the Catholic Church.

The miracle was officially declared by Bishop Jacques Benoit-Gonin of Beauvais, France on Feb. 11, the World Day of the Sick and the feast day of Our Lady of Lourdes. During Mass at the shrine’s basilica, Bishop Nicolas Brouwet of Lourdes announced the miracle.

The miraculous event involved a French nun, Sister Bernadette Moriau, who went on a pilgrimage to the shrine of Our Lady of Lourdes in 2008. She had been suffering from spinal complications which had rendered her wheelchair-bound and fully disabled since 1980. She also said she had been taking morphine to control the pain.

What happened to Sister Moriau at Lourdes?

When Sister Moriau visited the Lourdes Shrine almost a decade ago, she said she “never asked for a miracle,” according to the Associated Press.

However, after attending a blessing for the sick at the shrine, something began to change.

“I felt a [surge of] well-being throughout my body, a relaxation, warmth…I returned to my room and there, a voice told me to ‘take off your braces,’” recalled the now 79-year old nun.

“Surprise. I could move,” Moriau said, noting that she instantaneously walked away from her wheelchair, braces, and pain medications.

Moriau’s case was brought to the attention of the International Medical Committee of Lourdes, who extensively researched the nun’s recovery. They eventually found that Moriau’s healing could not be scientifically explained.

After a healing is recognized by the Lourdes committee, the paperwork is then sent to the diocese of origin, where the local bishop has the final say. After the bishop’s blessing, a healing can then be officially recognized by the Church as a miracle.

The shrine of Our Lady of Lourdes in southern France is a popular pilgrimage destination for individuals with special devotions to Mary and for those seeking miraculous healings. It is the site where young Bernadette Soubirous witnessed Marian apparitions, beginning on Feb. 11, 1858. The shrine also holds a spring of water which is said to have miraculous healing properties.

While there have been more than 7,000 miraculous recoveries attributed to the intercession of Our Lady of Lourdes at the French shrine, only 70 cases have been officially recognized by the Catholic Church. A miraculous recovery must generally be a complete, spontaneous, and immediate healing from a documented medical condition.

The last official miracle attributed to the intercession of Our Lady of Lourdes was declared in 2013.