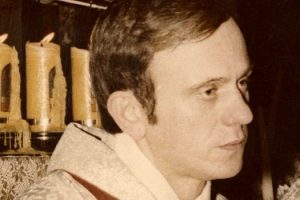 Crisis—2019 will mark the 30th anniversary of communism’s collapse in Poland and Eastern Europe. It will also mark 35 years since the murder of Father Jerzy Popiełuszko. I was safe in California when the communist secret police killed my old vicar in Poland in October 1984.

In May 1980, Father “Jurek” Popiełuszko was assigned to our parish, St. Stanislaus Kostka, where I was baptized. He was a physically frail servant of God with an indomitable spirit. To understand Father Jurek, we must shed some light on his personal background and the social and political context of his life.

Farm, Seminary and Priesthood
One of five children, the future priest was born in a farming family in Okopy of the Podlasie region in what is now eastern Poland. The infant was originally baptized Alfons, to commemorate his mother’s brother, Alfons Gniedziejko, an underground Home Army soldier killed by the Soviets after the conclusion of the Second World War.

The Popiełuszko family was traditionalist, patriotic, devout and poor. Their son earned official reprimands from the communists for his religiosity in high school. He resolved to enroll at a Catholic seminary in 1965.

As a form of persecution, the communists called up seminarians for military service. Popiełuszko served for two years, 1966-1968, in a special unit for clerics.

A red drill sergeant attempted to drum the faith out of the seminarian; but he failed. Cleaning toilets while wearing a gas mask was just one form of communist fun and games. The reds routinely mocked his given name: Alfons can also mean “a pimp” in criminal slang. Despite all the physical and psychological abuse, the seminarian [the future Fr. Jerzy Jerzy Popiełuszko] led the resistance among the clerics. Prayers and encouragement helped. Many years later the non-commissioned officer (NCO) still referred to his underling as “this uppity mug priest” (krąbrny klecha).

The stint with the military almost cost Popiełuszko his life. He fell seriously ill; he had to put his religious studies on hold for a couple of years.

Finally, Jerzy Popiełuszko was consecrated as a priest in 1971. He was first assigned to a couple of suburban churches right outside of Warsaw, where he concentrated on teaching children catechism. Later, he was dispatched to a church in the Polish capital itself. His duties were light on the account of his health. He even ended up again at a hospital for at least several months. However, as soon as he was released, Father Jurek exerted himself nonetheless, ministering to medical students and nurses at the university church of St. Anna in Warsaw’s Old Town. Eventually, under his tutelage, they served on teams of medical volunteers during the first visit of Pope John Paul II back to his homeland in 1979.

Father Jurek took a few breaks, including a brief visit to Canada and the United States, where he had family in Pittsburgh.

Fr. Popiełuszko was surprised how unaware the average American was with the outside world but, at the same time, his U.S. trip was a much-needed dose of rest and freedom to recharge his system before returning home.

St. Stanislaus Milieu
In May 1980, Father Jurek was assigned to St. Stanislaus Kostka in the Żolibórz part of Warsaw. Our parson, Msgr. Teofil Bogucki, immediately took the young priest under his wing. A formidable and… read the rest of the story here>>