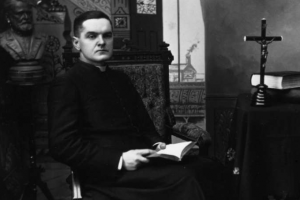 American priest heading for beatification died amid a global pandemic

CNA—Fr. Michael McGivney, an American priest soon to be beatified, died amid a 19th-century pandemic which may have been caused by a coronavirus.

Fr. McGivney founded the largest world’s largest Catholic fraternal service organization, the Knights of Columbus, in 1882. Today the order formed in his parish basement in New Haven, Connecticut, has grown to more than two million members donating millions to charity each year.

McGivney was serving as a parish priest amid the pandemic of 1889-1890, according to a press release issued by the Knights of Columbus May 27.

A lifetime of faith and service

Biologists using gene-sequencing methods have attributed the pandemic to a type of coronavirus, according to a Bloomberg report. This virus, which first appeared in Russia, killed a total of 1 million people worldwide, including 13,000 in the United States.

Pope Francis approved a miracle attributed to McGivney’s intercession on May 26, paving the way for the American priest’s beatification.

Born in Waterbury, Connecticut, in 1852, McGivney was the first of 13 children born to Irish immigrants Patrick and Mary McGivney. Six of his siblings died in infancy or early childhood. His father was a molder in a Waterbury brass mill, where the young McGivney himself worked for a brief time as a child to help support his family.

From an early age, however, he sensed a calling to the priesthood (two of his brothers also became priests). He was ordained in Baltimore’s Cathedral of the Assumption by Cardinal James Gibbons on Dec. 22, 1877, and took up his first assignment, as curate at St. Mary’s Church in New Haven, the city’s first parish.

In New Haven, McGivney faced anti-Catholic prejudice. A New York Times headline in 1879 — “How an Aristocratic Avenue was Blemished by a Roman Church Edifice” — deplored the construction of a new stone church after the original building was destroyed by fire.

In addition to his parish duties, he ministered to a 21-year-old man who was on death row for killing a police officer while drunk, visiting him daily up until his execution. On the day he was due to be hanged, James Smith comforted the priest, saying: “Father, your saintly ministrations have enabled me to meet death without a tremor. Do not fear for me. I must not break down now.”

Founder of Knights of Columbus

McGivney founded the Knights of Columbus at St. Mary’s in 1882 as a way to provide financial protection to families who suffered the death of a breadwinner — a challenge McGivney himself faced in his youth when his father died in 1873. The priest also hoped the organization would dissuade Catholics from turning to secret societies in times of need.

The Knights were named after the explorer Christopher Columbus. The order’s original principles were “unity” and “charity,” with “fraternity” and “patriotism” added later.

Fr. O’Donnell, a contemporary in Waterbury, remembered McGivney as “genial, approachable, of kindly disposition, cheerful under reverses, profoundly sympathetic with those upon whom had fallen the heavy hand of affliction, a man of strict probity and sterling integrity in his business transactions.”

“He was charitable to a fault, if I may so speak. The poor found in him a Good Samaritan,” O’Donnell said in 1900.

Another contemporary, Fr. Slocum, said: “Fr. McGivney, though a man of unassuming character, was possessed of an indomitable will, by which, aided by the grace of God, he was able to face unkind and unjust criticism from all directions in his great effort to found a society for the benefit of young men and the glory of the Church.”

Amid the current global pandemic, Bishop Barron says: “Turn this...