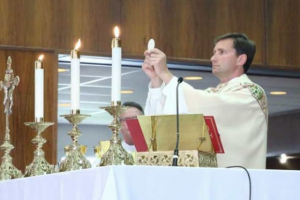 In light of Alaska’s 2018 earthquake in which the parish co-pastored by Fr. Arthur Roraff was the hardest hit, we reprint the excellent first homily of this same priest, given just 3 years ago. Adaptation for print 2015 by Catholic Anchor—

Jesus was in a boat in the Sea of Galilee, which still exists in Israel. It is called a sea but it is really more like a lake. It is about three times larger than Kenai Lake, but unlike the Kenai, which is a long and zig-zags, the Sea of Galilee is much rounder. If you were to walk all the way around it you would walk 33 miles. I find this interesting because that is the age Jesus was when he died.

But the present day Sea of Galilee is in the middle of a conflict. The western shore of the lake belongs to Israel and the eastern shore is part of the Golan Heights. The ownership of the Golan heights is disputed between the Israelis and the Palestinians. Each of these groups makes a claim upon this land. When I was visiting Israel a few years ago we stayed on the western side and could see and hear bombs exploding on the eastern shore, only a few miles across the lake.

I use this as an example of how even though some storms — like the storm account in our Gospel reading today — are calmed, they are usually replaced by other storms or conflicts. Jesus calmed the sea 2,000 years ago but there is still a storm of sorts going on there. We can see this same pattern in our world today. One storm ends and another begins.

Conflict and war have been part of our world since Adam and Eve. And all of these are directly or indirectly a result of sin.

So, what do we do about these storms? This is the question that Jesus answers today in the Gospel. Even though he calms the sea the ultimate solution is not the absence of the storm. The storm is a symbol and symptom of sin. After he calms the storm he rhetorically asks them, “Why are you terrified?” It as if he is saying, “This storm should not frighten you.” And then he points out the solution when he asks them, “Do you not yet have faith?”

Their problem was not the storm; it was their lack of faith. Faith in God is the balm or remedy for sin. If they had faith they would still have been in the storm but they would not have been frightened. The storm had control over their physical lives but had no control over their eternal souls. Storms can damage to our earthly lives. They swirl around us, often causing lots of noise and distractions but they have no control over our eternal soul — unless we permit it to do so. We can choose to fixate on storms or we can remain vigilant in our reliance on God, the only one who has complete control over our eternal lives. It is our faith in God that we should focus during storms.

This is why Jesus rebuked his disciples. They were focused on the things of this world rather than the things of eternal life. This is the work of the devil and I believe this is the devil’s primary tool in our era. The devil is in the distractions. He encourages us to look away from Jesus. This is not to say we don’t address the storms but the storms are reasons to have more faith, not less. It is a time to go to God, not away from him. Our faith in God replaces our fear. If the devil distracts us from our lord and savior, he wins — and he will do everything in his power to distract us.

But ultimately it is your choice. Do you allow the storm to distract you from Christ or do you keep your focus on Christ regardless of the storm?