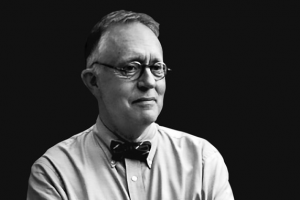 I was shocked to learn that Thomas Howard had died last week at age 83.  It just seemed, as odd as it sounds to say, so out of character for the lively, inspiring and fiercely bow-tie-affectionado professor, speaker and Catholic convert who was ever so full of life, good wit and clear discernment.

It is hard to imagine how many thousands of students he influenced, over many years, to live lives of meaning, purpose and unwavering Faith.

David Mills, in recounting the life and memories of his good friend, echoes my brief experience of the man when he describes his budding friendship with Howard:

“I also remember being amazed that so lively a man, who loved living so much, took asceticism so seriously. Only later did I see that his deep prayer and liturgical life created the lively man. Behind the effortlessness with which he seemed to move through the world lay a great deal of sacrifice and discipline and self-giving.”

My first and lasting encounter with Howard was in Oxford, England, while attending a two-week Oxbridge Conference in Oxford and Cambridge organized by the Redlands, CA-based C.S. Lewis Foundation on the 100th anniversary of C.S. Lewis’ birth. The speakers and nights of “whimsy” were profoundly insightful, inspiring, cultured, fun, fully immersed in the charm and beauty and history of the two University towns, and filled with wonder, learning and new friendships.

Among a plethora of amazing speakers was Thomas Howard, a cheerful, immediately engaging professor from Wheaton College in Illinois and, I later learned, a prolific, witty and profound author.  He was also a convert to the Catholic faith because, as he said elsewhere, “Evangelical is not enough.”

But that’s as far as I can go to honor such a man of Christian influence.  Below please find an especially wonderful and personal obituary honoring the great Thomas Howard, May He Rest In Peace!

by David Mills, Catholic Herald, UK—The popular and in some cases almost idolized Catholic writer Thomas Howard has died, at the age of eighty-five.

The scion of a major American Evangelical family — his older sister being the Evangelical superstar Elizabeth Elliot — he went to the Evangelical mecca, Wheaton College, and was expected to rise in that world, his gifts apparent to everyone.

In one of his early books, An Antique Drum (later republished as Chance or the Dance?), the dedication to his professor Clyde Kilby thanks him for taking him by the arm and saying, “Look.” I think that explains much of his appeal. Though a man of clear beliefs, he was not an ideologue: because he looked. Not a salesman or a preacher, but a man who shared what he saw and loved — and therefore a very good salesman and preacher.

I met him in the late seventies, as a newish and secularish Christian. He invited me to a small reading group he hosted called Beer and Bull. The first book I remember us reading was an Orthodox work called The Way of the Ascetics, all of which was new to me, and a little strange. I also remember being amazed that so lively a man, who loved living so much, took asceticism so seriously. Only later did I see that his deep prayer and liturgical life created the lively man. Behind the effortlessness with which he seemed to move through the world lay a great deal of sacrifice and discipline and self-giving.

Tom’s first book, Christ the Tiger (image to right of a 2014 version by Ignatius Press) made him a minor Evangelical celebrity. Published in 1967, it seems Christ the Tiger came at the right time, feeding younger Evangelicals reacting against the rule-bound culture of their youth and wanting more of the freedom and liberation they’d been told the Gospel brought.

In the book, he remarks with exasperation that people who talked so much about the heart cared so much for externals.

He and the Evangelical patriarch J. I. Packer became good friends when Tom was a teenager. (He introduced me to Jim, about whom I wrote three months ago when he died.) They later wrote a book together titled Christianity: The True Humanism, and taught classes together, the last of which ended (as described in my obit) with Jim throwing out an anti-Catholic declaration while walking out the door.

Tom was bemused, but told the story with affection and respect for Jim’s honesty and conviction. I’d like to think that now he has met Jim and got to say, “I told you.”

Though a man of clear beliefs, he was not an ideologue: because he looked. Not a salesman or a preacher, but a man who shared what he saw and loved — and therefore a very good salesman and preacher.

The fame Christ the Tiger brought him got him a teaching job at Gordon College, the east coast Wheaton, when he finished his doctoral work at NYU on Charles Williams. He became, quickly, a very popular teacher. He became also a very popular speaker, not least on C. S. Lewis, whom he’d met and wrote about a lot.

Some years later when he entered the Church, he lost the job. When he delivered his resignation letter to the president’s secretary and walked back upstairs to his office, he’d barely sat down when she knocked on the door and handed him the president’s acceptance.

It was a don’t let the door hit you on the backside on the way out gesture. We lived nearby then and knew the college. Insiders told me the donors would not tolerate a Catholic on the faculty, and there was never any chance the college would keep him.

The administration thought he couldn’t sign the school’s statement of faith. He thought he could, because he saw his movement into the Church as following to its end the trajectory Evangelicalism had set. He saw himself as a completed Evangelical, while the college saw him as not an Evangelical at all. He eventually came to see that the college had been right, though he never lost his ….  finish the story here, it is well worth the read!