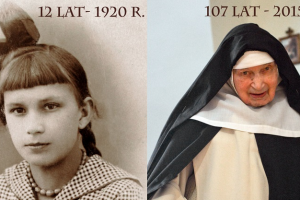 A Polish Catholic nun who defied the Nazis by shielding local Jews in a convent in Vilnius, Lithuania, died at 110 years of age last September 2018. Her life remains an inspiration to those of us living today, especially for Catholic business professionals as we face increasing government encroachment on civil and religious liberties.—ed.

It was thought that Sister Cecylia Roszak was the world’s oldest nun at the time of her death, and she had been a member of the Dominican community in Krakow, Poland, for nearly 90 years.

According to the Times of Israel, Sister Cecylia was born as Maria Roszak in Kielczewo, in west Poland. She had a religious calling at an early age, and decided to join the Dominican order in the monastery at Grodek, in Krakow, at the age of 21.

During the Second World War, Sister Cecylia was living in Vilnius, Lithuania, where she and nine other nuns had traveled to set up a new convent in 1938. After the outbreak of war, Anna Borkowska, the mother superior and leader of the nuns, decided to take in a group of Jewish resistance fighters, including two children whose parents had been murdered by the Nazi regime.

According to the Independent, the nuns provided shelter to a group of 17 Jews from an underground resistance movement that had formed in the Vilnius ghetto. The movement was formed to attempt to fight back against the Nazis, who were systematically exterminating the ghetto’s inhabitants.

Mother Borkowska was a staunch supporter of the resistance and even helped to smuggle hand grenades and other weapons into the ghetto for the resistance fighters. Sister Cecylia and the other nuns helped her by sheltering and protecting Jews inside the convent.

The people protected by the nuns included the acclaimed resistance fighter and poet, Abba Kovner. According to the Times of Israel, he is best known for his pamphlet of 1942, titled ‘Let Us Not Go Like Lambs to the Slaughter’, which was the first piece of … Read More>> (well worth the read!—ed.)